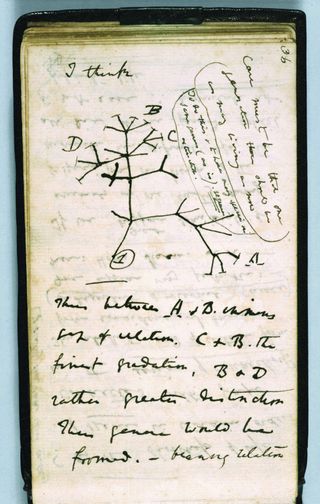 A reproduction of the first-known sketch by Charles Darwin of an evolutionary tree describing the relationships among groups of organisms will be featured in Darwin, the most in-depth exhibition ever mounted on this highly original thinker, November 19, 2005, through May 29, 2006, at the American Museum of Natural History.
(Image: © © By permission of the Syndics of Cambridge University Library)

A newly drawn-up evolutionary tree suggests a group of bacteria may be the last common ancestor for all life on Earth.

Researchers established the tree by scouring gene banks to compare shared proteins across the kingdoms of life, and they identified Actinobacteria, the group that has given rise to most human antibiotics, as the base.

William Duax, a physical chemist at SUNY Buffalo, and his team analyzed genetic sequences, looking for copies of proteins found in ribosomes.

Ribosomal proteins are good candidates for tracing the evolution of all species because they are easy to accurately identify and they are only transferred to individuals through reproduction, according to the American Institute of Physics. Structurally aligning the proteins allowed the researchers to pick out subtle differences that indicate which organisms belong on different branches of the evolutionary tree, they explained in a statement.

“Today the gene banks are enormous. They contain more than 600,000 genes from the genomes of more than 6,000 species,” Duax said in a statement. “We are applying a systematic approach to make sense of a sometimes messy gene bank.”

Duax and his team analyzed two different ribosomal protein families, called S19 and S13, which both point to Actinobacteria as the common ancestor.

The researchers will present their findings at the upcoming annual meeting of the American Crystallographic Association.