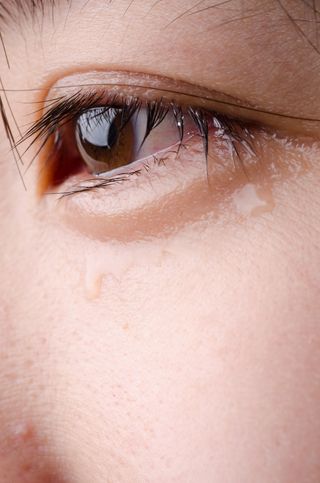 A new technology inspired by human tears could help eliminate a problem that causes a lot of office workers to shed tears themselves: printer ink that seems to cost a fortune--gallon for gallon, about a hundred times more expensive than gasoline.

University of Missouri engineering professor Jae Wan Kwon says he's solved a "historic printer nozzle problem" with his anti-clog nozzle, which spreads a thin layer of silicone oil over the opening of the print nozzle. This keeps the ink from drying out for months (the team tested for twelve weeks without any sign of problems) without the use of anti-evaporation additives that drive up the price of ink. If the ink can't dry out, it can't clog, and if it doesn't clog, there's no need to blast the clog free with a burst of ink (also wasteful).

Kwon says an obvious solution to preventing ink clots is to cover the nozzle head with a plate. But the nozzles are so small--usually about 1/5th the diameter of a human hair--that moving a tiny plate is very difficult. The surface tension of the ink itself would hold the tiny plate in place and require a huge force to move it.

So instead, Kwon turned to the human eye.

Human tears are actually made of three layers of fluid: mucous nearest to the eye, then an aqueous layer, and finally an oily layer that covers the liquid layer, keeping it in check. "I focused on the idea of using one liquid to control another liquid," Kwon says. "Suddenly I got the impression that this is it."

At the submillimeter level, the silicone oil can't be moved out of the way like an eyelid blinks away tears, so Kwon moves the oil droplet with an electric field.

Kwon hopes his tech will make its way into industrial printers and even bioprinters, which print 3-D tissues out of living cells. But in consumer printers? "If [the printer makers] want to sell more ink, then they will not change much, but if they want to sell more expensive and reliable systems, then they will change. My guess--as far as I'm concerned, all the ink and printer companies have been working on finding a way to avoid the clogging problem. I think they'll be following," he says.

That's worth shedding a tear of joy over.