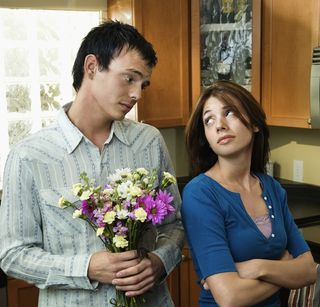 Public relations professionals be warned: People may act as though they forgive you if they're paid off after a slight, but to really let bygones be bygones, they've got to hear an apology.

A new study finds that both restitution and apologies are important in securing forgiveness, but the first may be hollow without the second.

"Apparently, actions and words speak loudest in concert," the study researchers wrote in the current issue of the Journal of Positive Psychology.

Jo-Ann Tsang, a professor of psychology at Baylor University in Texas, wanted to know how people would respond to a slight followed by different methods of apologizing. She and her colleagues asked 136 undergraduate participants to play a raffle game with an unknown partner.

In this game, the students received raffle tickets for a $50 gift card in each of three rounds after being told that there were 10 tickets per round that would be split between them and their partner. In some cases, the participants were told that the partner controlled the distribution. In other cases, they were told that the tickets were given out according to chance.

In reality, every participant was given only two tickets in the first round and then nine in the second. Some received a note with their second-round tickets apologizing for the initial round, however.

"Sorry about that first round," the note read. "I got carried away, and I feel really bad I did that."

In addition, some of the participants got extra raffle tickets back, accompanying the apology. [7 Thoughts That Are Bad For You]

Finally, the slighted participants had the chance to turn the tables. In the third round of play, they distributed the tickets. If they were in a forgiving mood, they'd most likely be generous to their partners. If they were holding a grudge, they'd likely send few tickets their partner's way.

The researchers also asked the participants how forgiving they felt about the slight in round one. That way, they had both the participant's word and his or her actual behavior to compare.

They found that restitution upped the odds that a participant would act forgiving toward a partner, giving them more tickets in round three. But for a participant to say they felt forgiving, they had to have received an apology.

"[I]t may be that 'I forgive you' is a more conscious feeling if they receive an apology," Tsang said in a statement.