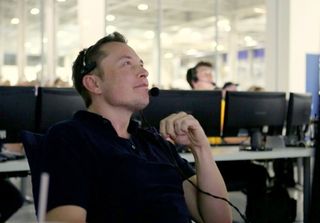 Silicon Valley entrepreneur Elon Musk has proposed a tube system that could whisk passengers from LA to San Francisco in half an hour. Here he sits in the mission control of his private spaceflight company SpaceX.
(Image: © SpaceX)

Elon Musk is no stranger to futuristic ideas as a Silicon Valley entrepreneur pushing electric cars and private spaceflight. But his latest vision for travel may be the wildest of all — a speedy commuting system several times faster than a bullet train and twice as fast as an aircraft.

The "Hyperloop" idea came up during a sit-down interview Musk had with PandoDaily. Musk, founder of Tesla Motors and SpaceX, described the possibility of going from downtown LA to downtown San Francisco in under half an hour and for much cheaper than airline tickets or other forms of transportation. He also cited California's current train woes as inspiration.

"It's something like a Jetsons tunnel, you just get in and it whisks you away?" said Sarah Lacy, founder and editor-in-chief of PandoDaily.

"Yes," Musk replied. He added that the transportation system could be self-powered around the clock by using solar panels and an undefined form of energy storage.

(Business Insider kindly transcribed the relevant part of the interview.)

California has already approved construction of a high-speed rail line that would connect San Francisco and Los Angeles — a journey lasting about 2 hours and 40 minutes. That multi-billion dollar project could make it tough for Musk to find public funding for his project.

Still, the Silicon Valley pioneer from possibly raise private funding — if he gets all the technical details hammered out and can convince investors of the payback.