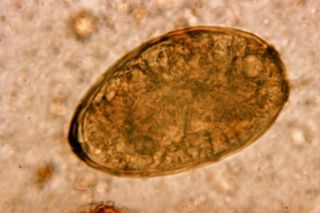 This photo shows an egg from the fluke worm parasite Paragonimus westermani, which can infect the lungs of people who eat raw shellfish.
(Image: © CDC)

The number of U.S. infections from fluke worms in the lungs increased dramatically in 2009 and 2010, according to a new report, which traced the increase to the raw crawfish that people ate during recreational river trips.

Nine cases of paragonimiasis — the medical term for infections with the parasitic worms — were reported in or around Missouri in 2009 and 2010, after all of North America saw only seven cases in the previous 40 years, the report from the Centers for Disease Control and Prevention said.

People become infected with the fluke worms by eating raw crawfish. Seven of the nine most recent cases occurred after people ate the crustaceans while on recreational river cruises.

Because fluke worm infections are typically very rare in the United States, where shellfish is generally cooked before it is consumed, diagnosing and treating the patients was difficult, the CDC researchers said. Cases of paragonimiasis are much more common in Asian countries. The initial symptoms include cough and fever, and the infections are often misdiagnosed as tuberculosis, pneumonia, flu or bronchitis.

Most of the nine U.S. parasite cases were treated for another disease before the true cause of their illness was determined, according to the CDC report. Eight were men, and seven ate raw crawfish in conjunction with drinking alcohol.

All nine patients were eventually treated with the drug praziquantel, and seven od them recovered within three days. One patient experienced residual chest pain for four weeks, and recuperation was also slower for another patient, who had obstructive pulmonary disease.

Shellfish are the worms' hosts, and the prevalence of fluke-carrying shellfish in Missouri-area rivers makes trying to eliminate the parasite unfeasible, according to the report. Therefore, the public should be educated about the parasite and possible ways of becoming infected, and physicians should be more aware of the disease’s presence, the CDC said.

Pass it on: There have been more cases of fluke worm parasites, likely from increased raw crawfish consumption.