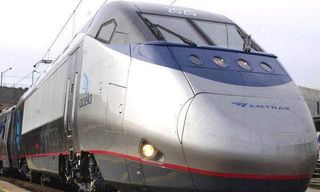 High-speed rail in the form of bullet trains and maglev could someday enter the U.S.
(Image: © US Department of Transportation)

Dreams of zipping along in a high-speed train between New York City and Washington, D.C. could become reality with Amtrak's new $151 billion plan. The national rail corporation hopes to build a new high-speed rail line along the Northeast Corridor by 2040.

The proposed high-speed rail line's top speeds of 220 mph would represent a big step up beyond Amtrak's Acela Express line — the only high-speed service in the U.S. today. Acela trains have top speeds of 150 mph, but average 80 mph across their journey because of speed limits on the current railroad tracks and overhead power lines.

Many previous high-speed rail plans have fallen by the wayside due to lack of federal funding, and many of the same realities and challenges remain for building U.S. high-speed rail. Amtrak's new plan acknowledges it would have to spend 15 years upgrading the current track before beginning to build the new track. [Throttle is Barely Open for High-Speed Rail in U.S.]

Still, the plan comes as a possible boost for high-speed rail fans that have looked to the trains in Europe, Japan and China with envy. California lawmakers have also just approved the launch of a multi-billion high-speed rail line that would connect San Francisco and Los Angeles, according to Grist.