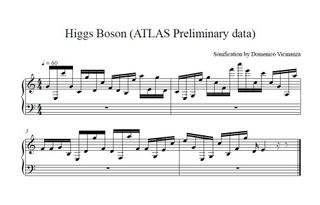 Atom-smashing physicists have just turned data for a newly discovered particle, likely the Higgs boson, which is thought to give all other particles their mass, into music.

What does the possible Higgs boson sound like? The music created from the particle's data is beautiful, with one version having a marimba feel. And now, you can listen for yourself.

On July 4, researchers at the world's largest atom smasher, the Large Hadron Collider (LHC), in Switzerland, announced they had seen a particle weighing roughly 125 to 126 times the mass of the proton that was consistent with the Higgs boson. The evidence came from two experiments at LHC, called ATLAS and CMS.

The researchers used so-called data sonification to transform data collected by the ATLAS experiment (one of the two experiments, CMS is the other, that found evidence for the likely Higgs particle) into sound. Essentially, they used a graph showing the ATLAS data and turned the energies of collisions shown on that graph into musical notes. Each data point, or energy number for a collision, was always given the same musical note, with the melody changes following exactly the same profile (the ups and downs) of the scientific data.

"It offers the same qualitative and quantitative information contained in the graph, only translated into notes," composer, physicist and engineer Domenico Vicinanza told LiveScience. [Gallery: Search for the Higgs Boson]

Vicinanza and colleagues created two versions of the "Higgs score," one a piano solo and the other a piano with added bass, percussion, marimba and xylophone. The spike in data around 126 gigaelectron volts (where one GeV is about the mass of a proton), the telltale sign of Higgs, can be heard about 3.5 seconds into these recordings.

The beats are not just music to the ears, as Vicinanza said the melody could be useful for many reasons. "For example, it would allow a blind researcher to understand exactly where the Higgs boson peak is and how big the evidence is," Vicinanza said. "At the same time, it could give a musician the opportunity to explore the fascinating world of the high-energy physics by playing its wonders," added Vicinanza, who is a network engineer at DANTE, which is part of the high-speed pan-European research and education network called GÉANT.

Also, Vicinanza added, using different algorithms for turning data into sound, researchers may be able to detect interesting phenomena just by listening to their data.

Vicinanza and two collaborators, Mariapaola Sorrentino and Giuseppe La Rocca, relied on GÉANT to convert the data into sound.