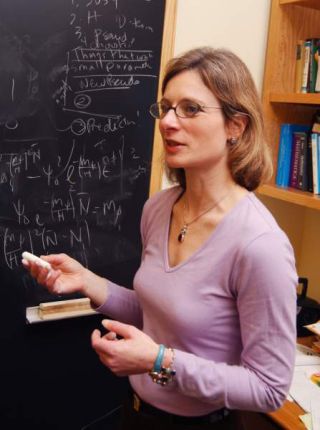 What is the nature of time and space? How did the universe begin, and how will it end? These are existential questions for most people, but they're all in a day's work for physicist Lisa Randall. The Harvard university scientist has researched particle physics, string theory, and the possibility of extra dimensions.

Her new book, "Knocking on Heaven's Door: How Physics and Scientific Thinking Illuminate the Universe and the Modern World" (Ecco, September 2011), tackles some of the greatest cosmological conundrums physicists face today, and explains why we could all use a little more science in our lives.

LiveScience spoke to Randall about dark energy, the fear of science, and the world's largest particle accelerator, the Large Hadron Collider in Switzerland. [Wacky Physics: The Coolest Little Particles in Nature]

LiveScience: Do you think the scientific method and rational thinking are in short supply outside the realm of science? Do you think they could play a larger role in, say, politics or culture?

Randall: When I think of the magnitude and the enormity of the issues that societies have to deal with today, it seems obvious that you would want to use all the tools at your disposal, and one of them is the scientific method.

I would like to think that we could be a little bit prouder of the fact that we have learned how to evaluate things a bit more scientifically and use what we’ve learned more broadly in the world. That doesn't mean just making a simple model and figuring out its consequences. Another critical aspect of the scientific process that I try to emphasize is understanding what your assumptions are and understanding both the methods and the limitations of the methods in any given context. It's not that I don't think people have the ability to use science, but I think somehow we're afraid to apply these methods.

LiveScience: So you think people are afraid of science?

Randall: It's a good question. I don't know, and I don't want to over-generalize. I think there's some fear of science. People fear some things they don't necessarily understand.

We need to clarify that when science is applied properly, it can do a lot of good. Sometimes I think it's seen in this culture almost as a little bit of an embarrassment, that it's egotistical or something. But a lot of people really are using science to try to make the world better.

A lot of the book is about how society is presented with this clean picture of science, which is that it makes definite statements with definite rules. Indeed it does in many contexts, but those have evolved over time through careful analysis and evaluation of the ideas. When you're actually in the middle of research, asking a question, you have to be both confident that you might see something but also very cautious and very careful. Science research doesn't necessarily proceed in the clean linear manner we have in mind. That kind of carefulness is also a part of what science is about, and we need more of that, too when we think of real-world questions.

LiveScience: At a time when most people in the country are preoccupied with their jobs and mortgages, why should non-scientists care about particle physics, or even science in general?

Randall: Well, first of all, I don't presume to tell anyone what they should care about. I think there are a lot of people who do care, and I think the people that do care should have access to information. Science can be difficult. It is removed from our immediate reality in many ways, and that's why I try to explain how our intuition is formed by what we see. But many people want to know what lies beyond the obvious, and learn the detailed notions that have been developed over time through advanced theories and experiments.

But we can also ask why would we want to be doing science at all, especially advanced science like the type I explain? The answer isn't necessarily direct. We know we end up with many advances when we have advanced science, but the ultimate benefits aren't always predictable.  In a lot of great discoveries in   science, you couldn't always connect the dots in advance. But when you do these amazing things that stretch technology to the limits, that stretch ingenuity to their limits, you often end up with remarkable achievements. If you have an educated and interested public, you tend to make progress.

LiveScience: You write about the Large Hadron Collider in Switzerland, which is one of the biggest experiments going on right now. Why is the LHC so important?

Randall: The Large Hadron Collider is studying the highest energies and the shortest distances that we've ever been able to explore. We can learn some remarkable facts about the ultimate makeup of the world. The first question experiments at the LHC should answer is how elementary particles acquire their mass. Why isn't everything just moving around at the speed of light? A lot of the structure in the universe formed because elementary particles have mass. [Infographic: Nature's Tiniest Particles Dissected]

The second question is, why are masses what they are? If you actually just applied the principles of quantum mechanics and special relativity, you would expect masses that are far bigger. This turns out to be a very challenging question. The answer could have some very deep and fundamental consequences.   The best explanations so far turn out to be quite exotic, including extensions of space-time symmetries or even an extra dimension of space.

LiveScience: The LHC came online in 2008. Is it surprising that it hasn't discovered any new physics yet?

The exception is the Higgs boson, which has to do with particles acquiring their mass. We expect that the Higgs boson is light enough to be accessible within the next year. The most likely mass of that particle is such that it would decay in ways that we would not have seen yet. However, in this coming year there should be enough collisions to find evidence.

On the other hand, if you had asked me, do we expect to see the evidence of other theories, such as those that explain why masses are so light, in this particular run, I would have said no. These particles and phenomena related to them are likely to emerge only at higher energy.

LiveScience: Besides the LHC, what are some of the most exciting experiments being done in physics right now?

Another thing that's really interesting is the Planck satellite, which is exploring radiation left over from the Big Bang, back in history, back at the time when charged particles combined into neutral atoms. So we can learn some very precise information about the early history of the universe.

LiveScience: How complete is our current picture of the universe? Are general relativity and quantum mechanics a true model of what's going on?

Randall: The theories we have now, the ones you just mentioned, they work. They're definitely successful theories. But there can be lots of deep underlying structure.

So yes, I do think there could well be ultimate underlying theories. We always think we have the final answer at some level, but we're never right about that. So probably there are deeper underlying theories, but that won't necessarily mean the things we're working on now are wrong.

LiveScience: If you could have been born during any scientific era, which one would you choose?

Randall: Probably today, since as a woman, it's probably easier to be a part of the science community now than it has been in any earlier era.

LiveScience: In terms of your own research, what are you working on these days?

Randall: There are a couple of different directions. One has to do with dark matter, the matter throughout the universe that doesn't interact with light. To me the most intriguing question about dark matter is why is the energy in dark matter about six times the energy in ordinary matter. In principle, it could have been totally different. If it's not interacting the same way ordinary matter is, it could have contained one hundred or one trillion times the energy. So the fact that the energies in dark and ordinary matter are so close together seems to really indicate that there's something deep and fundamental going on, and that's something I would really like to know about.

The other direction I'm working on has to do with the physics being studied at the Large Hadron Collider.  We have this general idea that the Large Hadron Collider is at the right energy to look for new physical phenomena. But it also is true that masses can be heavier and inaccessible to its energies. One of the challenges is to accommodate both light and heavy matter that both seem essential to a successful model. Along with collaborators, I am exploring a very interesting candidate model that accommodates current experimental results very naturally.