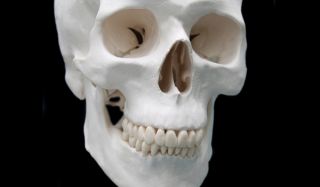 Later in life, drinking one to two alcoholic drinks daily may curb bone loss — so much so that just a two-week break from alcohol hastened bone decline in women in a new study.

Researchers looked at the effects of moderate alcohol consumption on "bone turnover," or the breaking down of old bone cells, in healthy post-menopausal women. After menopause, women's production of new bone cells slows, but the rate of shedding old cells does not slow as much. In other words, the "out with the old" outpaces the "in with the new," leading to a porous skeleton that easily fractures.

But past studies have shown that women who drink moderately (one or two alcoholic beverages per day) have higher bone density than non-drinkers or heavy drinkers. Now, the new study suggests why: Alcohol appears to reduce bone loss in middle-age women by suppressing the rate at which their bones shed old cells.

In line with previously observed trends, the women in the study who drank more alcohol (up to two drinks per day) had denser hip bones than those who drank less (as little as half a drink per day). [How Much Alcohol Is in My Drink?]

More tellingly, blood tests showed that abstaining from drinking for just two weeks triggered an acceleration of bone turnover in all the women. After a 14-day alcohol holiday, the women's blood contained heightened levels of a molecule that gets released during bone turnover. And less than a day after the women resumed their normal drinking, blood levels of that molecule dropped again.

"After less than 24 hours, to see such a measurable effect was really unexpected," said study researcher Urszula Iwaniec, associate professor in the College of Public Health and Human Sciences at Oregon State University.

Iwaniec and colleagues detail their results online today (July 11) in the journal Menopause.

It is yet to be determined whether alcohol also benefits younger drinkers' bones. In one past study, 20- to 47-year-old women experienced a drop in the marker of bone turnover in after they drank two beers, but "longer-duration studies are required before any conclusions can be made regarding the beneficial or detrimental effects of moderate alcohol on bone health on younger individuals," Iwaniec told Life's Little Mysteries, a partner site to LiveScience.

She added that it is possible alcohol "may be detrimental to the growing skeleton, but have beneficial effects on the aging skeleton."

Drinking too much alcohol (at any age) undeniably causes health problems, the researchers noted, but the new findings cast one more vote in favor of moderate alcohol consumption as part of a healthy diet in middle age. Past studies have linked moderate drinking with lower risk of cardiovascular disease, lower risk of stroke in women and lower mortality in general.