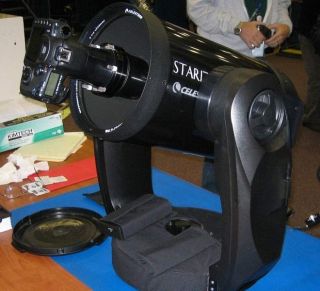 The ISERV camera, once on the space station, will be positioned to look through Destiny's Earth-facing window.
(Image: © NASA)

A camera headed for the International Space Station has the resolution to spot objects as small as cows down below — but it's using that power to take pictures of floods, landslides, forest fires and similar disasters on Earth.

The Pathfinder camera comes as a new prototype built by NASA and the U.S. Agency for International Development under the SERVIR program. The U.S. agencies want the camera to help track changes in environmental disaster zones as it gazes through a 20-inch window in the space station's Destiny module.

"Let's assume an earthen dam gives way in Bhutan," said Burgess Howell, a science lead for the SERVIR. "With an instrument like Pathfinder, we could show disaster officials where the bridge is out, for example, or the hospital is gone, the road washed out or the power substation inundated."

Pathfinder could even help estimate the number of destroyed buildings and their location, Howell said. The camera is designed to automatically take photos at seven frames per second for bursts of 6 to 8 seconds, for a total of about 40 to 60 images per overhead pass in orbit.

The camera's software can also calculate the best viewing chances for a particular area on Earth based on the space station's location in orbit, its attitude, direction and path.

Anyone who needs images of disaster areas could theoretically receive them within just a few hours. But the speed of getting a good image depends upon possible viewing opportunities along the space station's orbit — the camera may not get a good shot for several days.

First priority for using Pathfinder would go to the SERVIR program (SERVIR being a Spanish acronym meaning "to serve") and its mission to help make environmental decisions in developing countries. But the camera could also become available for the NASA science community. NASA manages the program from the Marshall Space Flight Center in Huntsville, Ala.

Pathfinder also represents a test program for future instruments that could look down upon Earth from the space station. Those cameras would sit on the outside of the space station with better sensors and equipment and leave the window-gazing to human astronauts.