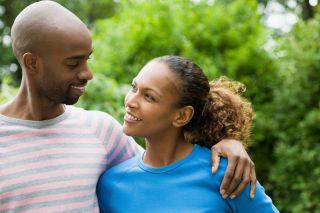 Saying "thank you" may be a simple way to boost marital happiness, new research suggests.

This cycle of appreciation may also make for longer-lasting relationships.

"Feeing appreciated by your partner influences how you act in your relationship, and how much you want to stay in that relationship," study researcher Amie Gordon, of the University of California, Berkeley, told LiveScience. "Instead of just waiting for the other person to make you feel good, you can jumpstart that cycle and take it into your own hands by focusing on what's good in your relationship."

"What goes wrong in a lot of relationships is if you start to take your partner for granted," Gordon told LiveScience. "You get used to having them in your life and forget why you chose to be with them."

Gordon and her colleagues also brought couples into the lab and monitored their interactions with each other. The participants ranged in age from 18 to 60, with nearly half the couples living together. Other researchers coded how the two interacted, including how often they touched each other, how engaged they were in the conversation they were having, and how often they made eye contact.

They found that, the more often a participant acted understanding, validating and caring toward their partner, the more appreciated their partner felt, and the happier both were in the relationship. These behavioral displays — leaning in to your partner when they are speaking, making eye contact, giving comforting touches — are important ways that people show gratitude.

"The punch line is really that being appreciative of your partner is beneficial in helping you want to maintain your relationship," Gordon said. "When you are appreciative and you notice the value in your partner, it helps you realize what you have and makes you want to hold on to it.  You have something good and you think, 'I want to keep it.' You are more responsive, you tend to their needs, and you are more thoughtful."

The study was published May 28 in the Journal of Personality and Social Psychology.