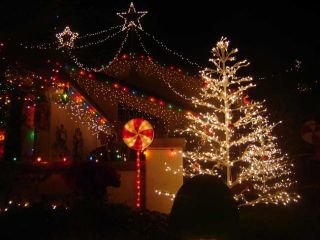 For those dreaming of a green Christmas this year, there’s some good news on at least three fronts. In New York City, the incandescent lights that have adorned the Rockefeller Center Christmas tree were replaced this year with 30,000 energy-efficient bulbs; in Paris, the trees lining the Champs-Elysees are shining brighter while using less energy; and in Washington, D.C., the White House will spend less on electricity to light its tree on the lawn this season. All these trees are now beaming with light-emitting diodes (LEDs) instead of the traditional incandescent bulbs. “The LED lights use much much less energy than the bulbs,” said Jerry A. Simmons, program manager for Solid State Lighting R&D at Sandia National Laboratories in New Mexico. “For the mini-size [bulbs], the LEDs put out equal amounts of light and use less than one-fourth the energy.” Try this at home Incandescent bulbs—the old-fashioned approach still used by many U.S. households—work by running electric current through a filament that heats up so much it glows. “It’s exactly the same principal of taking a hot poker and putting it in a fire,” Simmons told LiveScience. “It’s inefficient because in addition to sending out light, it’s sending out heat as well.” LEDs are basically semi-conductor chips. There are two wires that go into an LED. Electrons flow into one side and positive charge carriers—known as holes—flow into the other side. Electrons and holes are opposites and when they meet they annihilate each other and produce a light particle. “The nice thing about LEDs is that you can make them so they emit light only in the visible [range] of the electromagnetic spectrum and no heat comes out,” Simmons explained. According to a Consumer Reports evaluation, mini-LED strings cost some $6 more than the same length of incandescent string. But the operating cost saves the consumer about $1 per holiday season. So it might take more than a few 90-day seasons for the typical user to see some monetary payoff. But given the extreme durability of LEDs, expect them to burn for about 4,000 hours and last at least 13 seasons. What it means to the planet Assume that a typical family uses 50 feet of light strings each holiday season and keeps them on for some 300 hours, Simmons explains. “If the lights were mini-sized, then about 9 kilowatt-hours of $1 would be saved in electricity costs per family.” “With perhaps 100 million families in the U.S., then the savings would be 900 million kilowatt-hours,” he said. “This would be worth about $100 million, using the 11-cents per kilowatt-hour average cost of electricity cited by Consumer Reports.” The switch, according to Simmons’ calculations, would result in a reduction of carbon emissions of 144,000 tons. “This is the low estimate and assumes that everyone uses 50 feet of mini-sized lights,” Simmons said. A more accurate estimate would be obtained if we guess that about half of the above families use mini-sized lights and the other half uses the C7 or C9 size—C7 and C9 bulbs are larger than mini-lights and are typically used for outdoor holiday lighting. In that case, Simmons estimates the nationwide savings to reach $375 million, resulting in carbon emission reductions of as much as 470,000 tons. So what else can you do to make the holidays green? Simmons suggests putting a timer on your holiday lights to avoid unnecessary energy usage and making a list and checking it twice to purchase all your gifts in as few trips as possible. Both suggestions help your wallet and the environment.