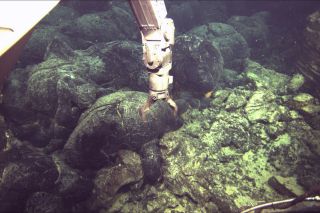 An underwater volcano gave off clear signals well before its outburst last year that it would erupt, findings that could help forecast such eruptions in the future, researchers say.

Submarine eruptions account for about three-quarters of all of Earth's volcanism. However, the overlying ocean and the sheer vastness of the seafloor make detecting and monitoring them difficult.

Now robot submersibles and a host of other scientific instruments are helping scientists learn more about these mysterious volcanoes. Their findings could lead to short-term forecasting of undersea eruptions in the future.

Researchers concentrated on Axial Seamount, an undersea volcano about 250 miles (400 kilometers) off the Oregon coast. The volcano, located under more than 4,900 feet (1,500 meters) of water, erupted April 6, 2011.

"Axial Seamount is unique in that it is one of the few places in the world where a long-term monitoring record exists at an undersea volcano, and we can now make sense of its patterns," said researcher Bill Chadwick, a geologist at Oregon State University in Newport.

The researchers used pressure sensors on the seafloor to monitor its vertical motions. "Uplift of the seafloor has been gradual and steady beginning in about 2000, two years after it last erupted," Chadwick said. "But the rate of inflation from magma went from gradual to rapid about four to five months before the eruption. It expanded at roughly triple the rate, giving a clue that the next eruption was coming."

"This kind of movement has been detected in volcanic areas on land before, but not this effectively in the oceans," said marine geologist Neil Mitchell at the University of Manchester in England, who did not take part in this research.

Seismic data from underwater microphones also gave clues to the volcano's behavior, showing a gradual buildup in the number of small earthquakes (roughly magnitude 2) in the four years prior to the 2011 eruption. Then researchers detected an abrupt spike in seismic energy about 2.6 hours before the eruption.

"The hydrophones picked up the signal of literally thousands of small earthquakes within a few minutes, which we traced to magma rising from within the volcano and breaking through the crust," said researcher Bob Dziak, an Oregon State University marine geologist. "As the magma ascends, it forces its way through cracks and creates a burst of earthquake activity that intensifies as it gets closer to the surface."

"Using seismic analysis, we were able to clearly see how the magma ascends within the volcano about two hours before the eruption," Dziak added. "Whether the seismic energy signal preceding the eruption is unique to Axial or may be replicated at other volcanoes isn't yet clear, but it gives scientists an excellent base from which to begin."

Mitchell told OurAmazingPlanet, "If we can tell these volcanic swarms apart from normal tectonic earthquakes, we have one way of monitoring volcanism in the oceans."

The investigators also used a robot submarine to scan the seafloor with sound waves, mapping the topography of the volcano from about 165 feet (50 meters) above the peak before and after the 2011 eruption. These surveys enabled geologists to clearly distinguish the 2011 lava flows from the many previous flows in the area and locate the fissures from which these flows emerged, said researcher David Caress, an engineer at Monterey Bay Aquarium Research Institute in Moss Landing, Calif. The detailed images show lava flows as thin as 8 inches (20 cm) and as thick as 450 feet (137 m).

"We saw snowblower vents that were spewing out nutrients so fast that the microbes were going crazy," Chadwick said. "Combining these biological observations with our knowledge of the ground deformation, seismicity and lava distribution from the 2011 eruption will further help us connect underwater volcanic activity with the life it supports."

The researchers said Axial Seamount could erupt again, perhaps as soon as 2018, based on the cyclic pattern of ground deformation they see.

"Now that we know some of the long-term and short-term signals that precede eruptions at Axial, we can monitor the seamount for accelerated seismicity and inflation," Dziak said.

The scientists detailed their findings online June 10 in three papers in the journal Nature Geoscience.