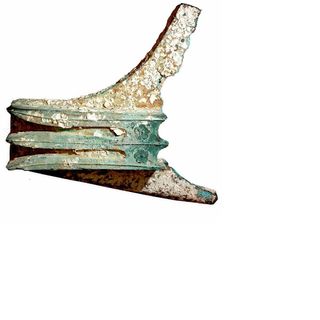 One of five rams discovered near the Egadi islands off the West coast of Sicily. This is very similar to the ram the researchers studied.
(Image: © Patrick Frank)

An ancient warship's ram has been slowly disintegrating since it was retrieved from the floor of the Mediterranean Sea. A new analysis shows sulfuric acid buildup is to blame.

Researchers are racing to find a way to slow the disintegration and perhaps, in the process, learn how to preserve other ancient wood structures after they've been plucked from the ocean and exposed to the air.

Currently the ram — known as a rostrum, a beak-like part of the prow that ancient warships used to ram holes into enemy ships — is being stored underwater, and some of the acidity from its exposure to air (when it was brought to the surface initially) has washed away. But if it were ever to be displayed out in the air, the sulfuric acid production could turn out to be a real problem, study researcher Patrick Frank of Stanford University told LiveScience.

During the First Punic War, between 264 and 241 B.C., hundreds of warships from the Roman Republic and Ancient Carthage met in the Mediterranean, sending some of them to the seafloor.

In 2008, one ship's rostrum — made of bronze, over a core of wood — was discovered 150 feet (46 meters) offshore from Acqualadrone ("The Bay of the Pirates") in northeastern Sicily, under 22 feet (8 m) of water. The ship had sunk around 260 B.C., during the battle of Mylae, researchers said. [The History of Human Aggression]

Previously researchers had studied the metal of the ram to locate its origin. Because of the unique chemical fingerprints that metals have (based on the mine they came from), the bronze of the ram was determined to be from either Spain or Cyprus.

The ram is embossed with six swords pointing forward, three per side, Frank said: "The ram was built to really bash a hole in the side of a ship which would be very difficult to cover or repair."

The bronze rostrum had a wooden core that broke off with it and was preserved on the seafloor. In the current study, researchers analyzed the acids and other substances in the wood, and showed that the wood supporting the ram was pine, waterproofed with pine tar.

The research also found sulfur in the wood that, over time and especially when exposed to air, could turn into sulfuric acid, an extremely corrosive substance.

"The sulfur diffused into the wood and actually preserved it against degradation during burial in the seabed," Frank said. "However, the same sulfur causes the sulfuric acid threat after the wooden object is removed from the sea and kept in a museum, in air."

This could lead to the destruction of the artifact, Frank said: "Sulfuric acid attacks the wood by destroying the cellulose. It's a general problem for recovered wooden marine wrecks," he said by email. "The wood can become quite acidic — sometimes measuring as low as pH 1. The wood becomes soft and spongy and loses its strength."

This transition is made even more dangerous by the presence of iron and copper in the wood, which may catalyze, or speed up, the chemical reaction. The researchers suggest that removing ozone from the air around the artifact could slow the conversion to acid, and therefore the destruction of the ram.

What is happening to the ram is probably the normal way that these recovered shipwrecks age, Frank said, so it could be important in saving not only this specimen, but other ancient wood structures that have been preserved underwater.

The study was published April 30 in the journal Analytical Chemistry.