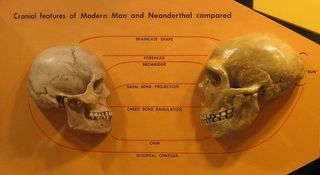 NEW YORK — One hundred thousand years ago, several humanlike species walked the Earth. There were tribes of stocky Neanderthals eking out an existence in Europe and northwest Asia, and bands of cave-dwelling Denisovans in Asia. A diminutive, hobbitlike people called Homo floresiensis inhabited Indonesia. What were essentially modern humans roamed Africa.

Then, about 60,000 years ago, a few thousand of those humans migrated out of Africa. As they slowly moved into new territories over the course of generations, they encountered the Neanderthals, the Denisovans and the hobbit people — all of whom descended from hominin groups that had left Africa during prior waves of migration. DNA analysis shows the humans interbred with these strangers, but other details of the encounters are lost to history. One thing is clear: only humans remain.

Why did we prevail? A panel of experts discussed their latest interpretations of genetic and fossil evidence Saturday (June 2), at the fifth annual World Science Festival here in New York. Humanity's success, they said, appears to be a "revenge of the nerds" story of global proportions.

First, although Neanderthals had as big a brain as anyone, the shapes of their fossilized skulls indicate humans had slightly larger frontal lobes, said Chris Stringer, a paleoanthropologist at the Natural History Museum in London. That brain region controls decision-making, social behavior, and such uniquely human tendencies as creativity and abstract thought. Meanwhile, Neanderthals were broader and stronger than us, with especially powerful upper bodies, and their robustness made them better adapted to Europe's cold climate. "In a sense, we're wimps," Stringer said. "Physically, we didn't have any advantage over the Neanderthals — quite the opposite."

This would suggest brains won out over brawn, and that rather than destroying our enemies in some epic battle, our ancestors may simply have been savvier survivors, steadily growing our numbers while our burlier brethren met their demise.

Braininess helped us broaden our diets, for example. We had smaller teeth than Neanderthals, suggesting we put some of those superior abstract thinking skills toward processing food (such as pounding cooked yams), which would have conferred a major survival advantage. "The more processing you do before it goes in your mouth, the more energy you save," Stringer said. "If you want your kids to survive, you can process the food for them as well."

Ancient hunting tools such as snares and fishing nets suggest we may also have been more efficient hunter-gatherers. "Modern humans had technology that allowed them to get a more consistent, reliable and balanced diet," said Alison Brooks, an anthropologist at George Washington University. [Top 10 Technologies that Changed the World]

Another handy cognitive capacity allowed the rapid spread of new technologies, as well as the sharing of knowledge and information relevant for survival: We were — and clearly still are — adept social networkers. According to Brooks, excavations of ancient human settlements in Africa have turned up stashes of stone tools located as many as 100 kilometers from where the stones were quarried, implying the presence of a sophisticated and multidirectional trade network. "You're seeing a completely different approach to social organization in modern humans … than we're seeing in the Neanderthals," Brooks said. "Neanderthals simply did not do this."

Why didn't they? Such activities would have required the ability to communicate in great detail, which raises an important question in terms of the other hominins' demise: Were Neanderthals, Denisovans and Homo floresiensis capable of language, and if so, how well-developed was their system of communication? "If they could talk, then perhaps that's not the reason why we beat them, but if they couldn't, it's an obvious reason," said Ed Green, a genome biologist at the University of California, Santa Cruz, and a member of the team that sequenced the Neanderthal genome in 2010 using DNA from fossils. "If you think about all the things that you know, and calculate how much of that you figured out yourself versus what was told to you, it's obvious how important speech and language is and being able to communicate." [The Original Human Language Like Yoda Sounded]

Neanderthals probably did have some form of language. They appear to have had a gene that is crucial to language in humans, and they buried their dead, which seems too complex an idea to have arisen among a tribe of mutes. But Brooks argues they may have lacked the vocal cords necessary for complex communication. "The sounds they made would have been a little bit less distinct" — somewhat like the speech of a 2-year-old, she said. That would imply they communicated in small groups, but not with others in a network; they simply wouldn't have been able to make sense of individuals with different accents.

Strangely coinciding with human beings' ability to cooperate is our tendency to be extremely aggressive. That, too, may have helped us prevail. "William James said 'history is a bloodbath.' And we should see that as a powerful generating force for what we are," said the Harvard evolutionary biologist E.O. Wilson. "If that trait is specific to our species as opposed to those competitors that fell before us, that could explain a lot."

Some combination of these cognitive and behavioral advantages led us to out-compete the other hominins, setting us on our uncontested path to world domination. "It's the really big brain 'Revenge of the Nerds' story," Green said. "There are 7 billion of us and maybe 100,000 of the most populous great apes. We've not only crowded out all the other hominin forms, but we're also on our way to crowding out all the other great apes."

In fact, we're so darn smart, we're in a bit of a pickle. "Our biggest danger right now is really our success," Green said. "We're taxing the world in a way that's never been done before, and so hopefully we're smart enough to figure out a solution to that problem."