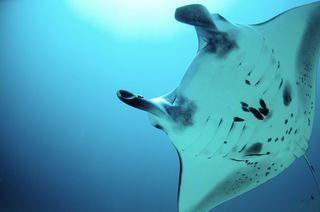 A rare ultrasound glimpse at a fetal manta ray reveals that that these graceful fish can "breathe" in the womb.

Unlike most animals that give birth to live young, manta rays don't have placentas or umbilical cords. That means their fetuses must get nutrients in some other way. Despite the rays' huge size (they can grow up to 16 feet, or 5 meters, across), marine biologists know little about their lives. New research detailed today (June 5) in the journal Biology Letters reveals more than ever before about manta ray pregnancies.

Until 2007, scientists had no idea how long a manta pregnancy even lasted. That year, a baby manta ray was born into captivity for the first time, after gestating for a year and nine days, according to the conservation group MantaWatch.

Now, researchers at the Okinawa Churaumi Aquarium in Japan have welcomed a second manta ray bundle of joy, a female born in June 2009. The manta's mom was captured off of Okinawa about halfway through her pregnancy, giving birth at the aquarium six months later. [Marine Marvels: Spectacular Underwater Photography]

During the pregnancy, aquarium researchers conducted ultrasonography to examine the fetus while still in the womb. They found that the fetal manta repeatedly opened and closed her mouth, indicating rhythmic breathing known as buccal pumping. The most familiar on-land examples of buccal pumpers include frogs and toads, which expand their throats to take in air. In this case, the manta was not breathing air, but uterine fluid. Anatomical changes that happen around birth seem to allow baby manta rays to transition to pulling oxygen from water rather than from the uterine environment, the researchers reported.

The behavior of the fetal manta ray was similar to the behavior of other rays that hatch from eggs and pull in oxygen flowing through their egg sacs, aquarium officials found. However, live-born mantas not only breathe uterine fluid, they likely also drink it. There are no other sources of nutrients for them in the womb, and stillborn mantas have been found with uterine fluid in their digestive tracts.

Manta rays (Manta alfredi) live in tropical and subtropical waters around the world. Because the species seems splintered into small subpopulations, and because mantas are sought after as ingredients in traditional Chinese medicine, these gliding fish are listed as a vulnerable species by the International Union for Conservation of Nature.