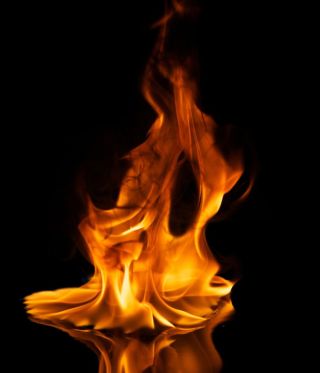 A flame may seem like a simple thing, but explaining why it exists can be tricky.

Ben Ames, a graduate student in quantum optics, made an animated video with a musical conclusion to provide an explanation an 11-year-old could understand. His entry won actor Alan Alda's "The Flame Challenge."

Ames, who is studying at the University of Innsbruck in Austria, begins his explanation with an introduction of the atoms involved. Carbon and hydrogen are locked up in the wax and wick of the candle, while oxygen is present as a gas in the surrounding air (represented as Legos in the video). Normally, oxygen atoms bounce off the carbon and hydrogen in the candle, not doing much damage. But the addition of heat causes the oxygen atoms to bombard the candle, which, in turn, causes the hydrogen and carbon atoms to leave the candle as a gas and mix with the oxygen.

Ames also explains the origins of the blue and yellow-orange colors visible in a flame. The former is the result of atoms emitting light as they are rearranged, and the latter the result of hot soot (made of carbon), according to his video.

In the end, he summarizes with song: "Remember, first the fuel loses mass and turns to a gas. Before the next change is through, some atoms shine blue. When the process is complete it gives off heat. Extra carbon will glow red, orange and yellow."

Ames has a passion for music, film and the performing arts, according to an announcement by the Center for Communicating Science at Stony Brook University in New York.

"So when I learned about this wonderful contest, I had finally found a project where I could put all of my interests to use. I locked myself in my basement for a solid week, writing, narrating, animating, and composing every element of the film," Ames said, according to the announcement.

Alda, an advocate for the clear communication of science who helped found the Center for Communicating Science, announced The Flame Challenge in a commentary in the March 2 issue of the journal Science.

As an 11-year-old, Alda wrote he asked, "What is a flame?" But his teacher's answer — "It's oxidation" — left him unsatisfied.