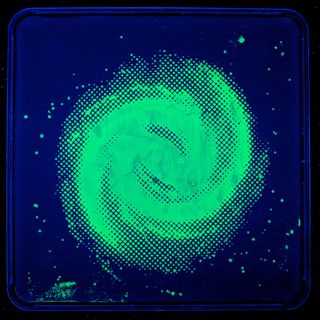 Artist and former microbiologist Zachary Copfer uses bacteria, given genes that make them fluorescent, to create images, such as this one of the Milky Way Galaxy. These pieces were inspired by Carl Sagan's term "star stuff," which refers to the concept that living things, including humans, are made of atoms created in stars.
(Image: © Zachary Copfer )

At an upcoming art exhibit, glowing images of heavenly objects — stars, galaxies, nebulae and remnants of supernovae — will have unusual frames: the clear rims of Petri dishes, the sort typically used to grow microbes.

There's no coincidence here. The images of these astronomical structures have been created from the bacterium E. coli, a more typical resident of the cell culture dishes.

The artist behind these new images, Zachary Copfer, a graduate student at the University of Cincinnati, knew he wanted to create something that reflected the concept of "star stuff." Introduced by writer and astronomist Carl Sagan, "star stuff" refers to the concept that living things, including humans, are made up of atoms created in stars.

His work, made as part of his master's of fine arts degree, is scheduled to go on display at the Sycamore Street Gallery in downtown Cincinnati, along with work by other students on June 8 through 12. [Gallery: Microbes Make Galaxies]

To bring the very large and the very small together, Copfer, a former microbiologist, developed a new photographic printing technique he calls bacteriography.

First, he genetically alters his medium, the bacteria, by giving them a sequence of genes, originally found in jellyfish, that code for a fluorescent protein (called GFP for green fluorescent protein). Under ultraviolet light (also called a black light), this protein emits light at a longer wavelength that is visible to the human eye.

He then spreads the genetically modified microbes within a Petri dish and exposes them to short-wavelength ultraviolet radiation. This treatment is not intended to make them glow; it kills off the microbes living in certain patches. Later, these patches will become the dark spots of the image. He then gives the bacteria some time to grow and spread, until he is satisfied with the image. To stop the growth where it is, he refrigerates the dish, gives it another radiation treatment and covers the bacteria up with a layer of acrylic. Then the image is ready to be displayed.

"It's totally in its infancy as far as I am concerned," he said. "This is literally the first step of making work using this method and exploring a new medium."

Copfer has also used a variation on this technique to use red-colored bacterium Serratia marcescens to create portraits of artists and scientists who have inspired him. He plays with the relationship between the two fields by labeling scientists Albert Einstein and Charles Darwin as his favorite artists, and artists like Pablo Picasso and Leonardo da Vinci as his favorite scientists.

"Picasso and Einstein were working with the same idea, looking at three-dimensional space from different perspectives, Einstein from the Theory of Relativity and Picasso with cubism," Copfer said.

In future work, he hopes to explore the fraught relationship people have with bacteria, which becomes evident when they look at his work.

"People love to get in close to look at it, and when I tell them what it is, they step back, like, 'oh my God, I shouldn't be near this," he said.

The gallery is located in the Sycamore Place Lofts at 634 Sycamore St., Cincinnati.