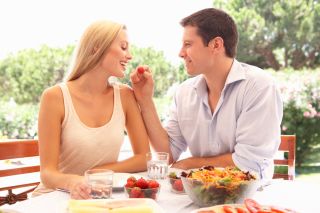 Being touched by a man really gets the ladies hot, new research suggests. When physically touched by a male experimenter, women actually did get "hot and bothered" — their skin temperature increased, specifically in the face and chest.

"Women showed a temperature increase when they were involved in social contact with the male experimenter," study researcher Amanda Hahn, of the University of St. Andrews, in the United Kingdom, told LiveScience. "In some women they changed by almost a whole degree" Celsius, or 1.8 degrees Fahrenheit.

These changes were subconscious in many of the participants. Figuring out how skin temperature changes in response to stress and other emotional factors could help researchers study arousal non-invasively and develop hands-off lie detectors.

The face heats up when under stress, or when scared, or angry (hence the term hot-headed). The researchers wanted to find how other emotions impact facial temperature, so they took heat-showing pictures of two groups of young heterosexual women during a standard interaction with an experimenter, which included touching the arm, palm, face and chest (using a light probe that they were told measures skin color).

When an experimenter (of either gender) touched a participant, the participant's average skin temperature jumped about a tenth of a degree Celsius. The effect wasn't as large when considering only touches to the participant's arm or palm, and the skin of the face and chest regions changed the most.

The jump was about three times larger when the experimenter was male, the researchers found. The facial and chest skin of a young female, when touched in those areas by a male experimenter, got about 0.54 F (0.3 C) hotter.

This increase is pretty large for a facial temperature change, the researchers said. "This is the sort of magnitude of change you would see when you are doing an explicit emotional stressor," like inducing fear or stress, Hahn said. "We weren't manipulating their emotional or affective state, it was a subtle social interaction with the experimenter … but they had pretty large reactions."

Many of the participants were unaware of their skin temperature reaction, when asked about it after the fact. "Only about a quarter of the sample reported feeling any emotional change. The rest were consciously unaffected by the interaction," Hahn said.

The researchers can't say if the changes are perceptible to the naked eye, or if they could be detected with touch. If others can detect these changes, they could serve as social cues that we use to communicate nonverbally.

The study will be published tomorrow (May 30) in the journal Biology Letters.