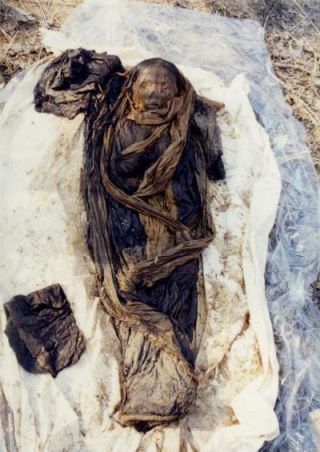 The ancient Korean mummy of a child provides clues to the hepatitis B virus genome.
(Image: © Seoul National Univesity)

A mummified child in Korea whose organs were relatively well preserved has produced the oldest full viral genome description. A liver biopsy of the mummy

revealed a unique hepatitis B virus (HBV) known as a genotype C2 sequence, which is said to be common in Southeast Asia.

The first discovery of hepatitis in a Korean mummy came in 2007. The new work provided more detailed analysis.

The research, announced today, was detailed in the May 21 edition of the scientific journal Hepatology.

Carbon 14 tests of the clothing of the mummy suggests that the boy lived around the 16th century during the Korean Joseon Dynasty. The viral DNA sequences recovered from the liver biopsy enabled the scientists to map the entire ancient hepatitis B viral genome.

Using modern-day molecular genetic techniques, the researchers compared the ancient DNA sequences with contemporary viral genomes disclosing distinct differences. The changes in the genetic code are believed to result from spontaneous mutations and possibly environmental pressures during the virus evolutionary process. Based on the observed mutations rates over time, the analysis suggests that the reconstructed mummy's hepatitis B virus DNA had its origin between 3,000 to 100,000 years ago.

Additional analysis of the ancient HBV genomes may be used as a model to study the evolution of chronic hepatitis B and help understand the spread of the virus, possibly from Africa to East-Asia. It also may shed further light on the migratory pathway of hepatitis B in the Far East from China and Japan to Korea as well as to other regions in Asia and Australia where it is a major cause of cirrhosis and liver cancer.

The study was done by researchers at the Hebrew University of Jerusalem, Seoul National University and other institutions.

The hepatitis B virus is transmitted through the contact with infected body fluids, including from mothers to their babies, through sexual contact and intravenous drug abuse. There are over 400 million carriers of the virus worldwide, predominantly in Africa, China and South Korea, where up to 15 percent of the population are cariers of the virus, according to the World Health Organization.

In recent years, universal immunization of newborns against hepatitis B in Israel and in South Korea has lead to a massive decline in the incidence of infection.