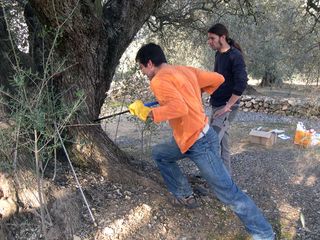 North-East Spain is home to olive trees thought to be at least a thousand years old, but scientists didn't believe the hype: Researchers analyzed tree cores and determined the oldest is only 627 years old.

This tree is in the Southern Catalan region of Montsià and is still one of the oldest olive trees in Europe, though.

Due to the large size of the olive trees in the Mediterranean region, many experts have claimed that they are over a thousand years old but "there had never been a scientific study to verify this," study researcher Bernat Claramunt of the Centre for Ecological Research and Forestry Applications, said in a statement. "In Europe there are many trees that are considered to be one thousand years old but nobody has calculated their age."

The scientists analyzed 14 olive trees (Olea europea) in Montsià region of Spain. "We use a technique that allows for the extraction of a small cylindrical piece of the trunk which goes from the bark to the core of the tree," Claramunt said. "This sample contains the life history of the tree."

The oldest of the 14 trees they tested turned out to be just 627 years old, but that still makes it the oldest recorded tree in Europe Claramunt said: "This is one of the oldest specimens recorded in the Mediterranean ecosystem and on the European Continent."

These cores can also be useful when reconstructing the climatic conditions of the last few centuries.

The study was published in the April issue of the journal Dendrochronologia. Because of the findings, the Regional Government of Catalonia has renamed the "millennium-old" olive trees as "monumental trees."