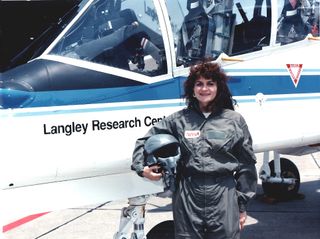 Computer engineer Karen Panetta does science with her own style.
(Image: © Jamie Heller)

Karen Panetta is a professor of electrical and computer engineering at Tufts University, an National Science Foundation CAREER award winner, a NASA Langley Research Scientists "JOVE" fellow, as well as a recipient of the Presidential Award for Excellence in Science, Math and Engineering Mentoring.

She created the "Nerd Girls" program, in which undergraduate students research renewable energy topics and act as role models for younger students. The program seeks to help undergraduates build confidence in their skills while preparing them for engineering careers, and to build and maintain professional opportunities for aspiring women engineers.

As her crystal-encrusted Hello Kitty laptop will signify, Panetta encourages young women to express themselves in a rich variety of ways, but always authentically.

What inspired you to choose this field of study? I was good at math and science and my father told me that I needed a career that could support my expensive shopping habits. I had no clue what an engineer did, but I found programming fun and wanted to learn more about what was inside the computer. So I chose computer engineering.

I also loved animals, animation, special effects, robotics, gymnastics, music and dancing and wanted to do something that would allow me to continue to enjoy all of those things. Computer engineering lets me use all these interests to create really cool inventions that help people, communities and the environment. I realized that I was using my imagination and creativity as a way to think about solving problems and didn’t worry about whether my ideas would be considered crazy. I didn’t let anyone or anything limit my imagination.

What is the best piece of advice you ever received? No one knows you better than yourself, so never let anyone limit your dreams. There are many people out there who will try to hold you back if you let them. Surround yourself with positive people who inspire you and encourage you to be the best you can be. People who care about you will be proud of your successes and help you achieve your own personal goals. It’s ok to be uncomfortable with new things and new challenges. If you’re not, you’re most likely going to be bored very quickly and not nurturing your potential.

It’s ok to be different and show your individuality. If you can’t be who you are on the inside, you won’t be very happy on the outside.

What was your first scientific experiment as a child? I chopped the hair off my dolls and learned that doll hair does not grow back. I also dreamed about being able to watch my favorite TV shows anytime I wanted, without commercials or without having to turn the television off because it was time for dinner or time for bed. I was 6 years old and I was inventing a video recorder in my head.

When I was in high school, we did lots of experiments, but none of them really stuck with me, except the egg drop exercise. We had to build an apparatus that would protect an egg from a fall. My friends used propellers and parachutes. I used pantyhose and old cardboard boxes. Their designs fell apart on impact. Mine survived. The teachers had never seen anyone use pantyhose in an engineering design before, yet it was an obvious material to use from my perspective.

What is your favorite thing about being a researcher? I get to combine my interests and solve real world problems. I have had the opportunity to help children diagnosed with autism and blindness in India, help doctors detect cancer better (using my image processing algorithms), build solar cars, work with monkeys and robots, and create cartoons (animations) that help scientists understand how diseases attack cells and how cells repair themselves. I also get to help our military by developing software algorithms [for technology that enables soldiers to] see in the dark to detect threat objects and dangerous situations. This helps keep our military personnel safe so they can come home safely to their families.

What is the most important characteristic a researcher must demonstrate in order to be an effective researcher? You must have imagination, determination and not be afraid to fail. We have a lot of experiments that fail, but for every failure, we learn more about making the idea stronger and more robust. You also cannot be afraid to ask questions and ask for help. Everyone cannot do everything by themselves, so we work in teams and that is how we tackle huge, complex projects. It’s quite different from being in school, where we all take our own tests and do our own homework. We are more like a musical band where everyone has their own part to play and together we make the song complete and sound awesome.

What are the societal benefits of your research? My research saves lives and helps people with disabilities, even if they have no arms and legs, do everyday activities like play video games. When you go through an airport security checkpoint, you are most likely seeing my research algorithms at work. They are screening luggage for objects that can hurt people and making those objects more visible to the humans looking at the screens. When you go to a hospital and get an X-ray, the doctors are most likely using one of my imaging algorithms to help make sure that the X-ray images are not too dark, allowing them to reveal anything out of the ordinary.

Who has had the most influence on your thinking as a researcher? Science fiction and any television show or fictional books about magic have influenced me the most. Look at how many things we see on television that were science fiction, but now are real — things like wireless communicators, video conferencing, games that detect your movements and search engines that can find you information in an instant.

One of my heroes is Tinkerbell, yes the mythical fairy Tinkerbell! She really is a great engineer! She sees solutions to problems to simplify people’s tasks but usually fails on her first attempt. She doesn’t give up and gets it right.

What about your field or being a researcher do you think would surprise people the most? When people hear that I am a computer engineer, they can’t believe that the projects I have worked on span so many different fields! My image processing algorithms help in the medical fields, yet I am not a biomedical engineer. My software helps diagnose children and get them help, but I am not a medical doctor. I teach robotics and animation and got to work for NASA and I am not an aerospace engineer. Computer engineering is truly interdisciplinary and we use computing technology to solve problems everywhere.

If you could only rescue one thing from your burning office or lab, what would it be? My students! As for non-live objects, I would save my pink Hello Kitty Laptop encrusted with 240 Swarovski crystals. I had it shipped from Japan and have never seen anyone else with one — it’s really a very powerful laptop and it is another example of how cool women engineers can be by expressing our own sense of style!

What music do you play most often in your lab or car? Beyonce and Jay-Z as well as Sarah Brightman, Fergie, Janet Jackson, Tina Turner and Christine Aguilera. I really enjoy artists who are not afraid to say and convey their messages in music. I also like strong female role models who connect with us and have a heart to their music. I love drum corps music too, like in the movie "Drumline" (Fox 2000 Pictures, 2002). I got to be in a drum corps when I was in college. I still love music and enjoy going to my students’ dance and music recitals. They were the ones who first introduced me to Jay-Z’s music. Today, all my students have ear buds, so I can’t tell what they are listening too anymore!