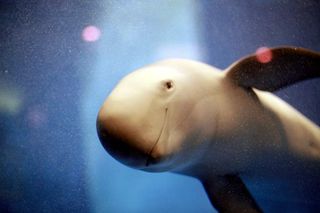 More than 32 Yangtze finless porpoises have been found dead in the Dongting and Poyang lakes in China in the last two months, leading wildlife experts to worry whether the rare animals are being pushed closer to extinction, the World Wildlife Fund has reported.

Yangtze finless porpoises live mainly in the freshwater Yangtze River and the two lakes, where the bodies of more than 32 of them have been found since March 3. One of the porpoises was pregnant, according to the blog Save Yangtze Finless Porpoise. [World's Cutest Baby Wild Animals]

"This tragedy shows that Yangtze finless porpoise is facing enormous challenges," said Lei Gang, head of WWF China's Central Yangtze program, in a statement. "The porpoise deaths illustrate that without effective measures to fundamentally reverse the trend of ecological deterioration, [the] future of the incredible creature is far from certain."

After examining the dead porpoises, scientists were left with a long list of possible culprits, including electro-fishing, strikes by boat-engine propellers, food shortages and pollution.

In electro-fishing, which is illegal, people use storage batteries to fire huge electric charges into the Yangtze and then collect the dead fish that float to the surface, according to an EDGE blog entry by Sam Turvey, who has studied wildlife along the Yangtze, including the Yangtze dolphin or baiji.

An autopsy report released April 17 by the Institute of Hydrobiology (IHB) under the Chinese Academy of Sciences suggests two of the finless porpoises were killed due to electro-fishing and boat-engine propellers.

Some experts have noted that climate change has lowered water levels in the Yangtze and its lakes, making it more difficult for porpoises to find food, but the researchers have yet to find any evidence that lack of food is resulting in porpoise deaths.

Rather than relocate the porpoises, local government officials, along with cetacean experts with the WWF, are considering conservation measures in the Dongting Lake.

In addition, the local government plans to implement a ban on illegal fishing (including electro-fishing), regulate sand dredging and limit boat speeds, according to the WWF.