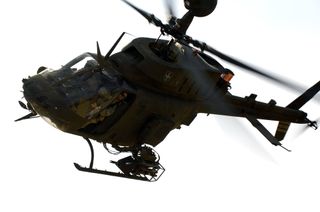 Motion-tracking game technology found in American living rooms has a shot at making its way into U.S. military helicopters. The Army envisions Microsoft's Kinect system as a low-cost solution for smarter cockpits that track what pilots see or do — opening the door for smarter war machines capable of responding quickly to human needs during combat.

The Microsoft Kinect for Xbox can already recognize gestures, faces and voices under almost any ambient light conditions for about $150. Such off-the-shelf gaming technology looks like a bargain next to expensive military helmets that track a pilot's head movements or eye gaze based on infrared detectors or magnetic sensors.

"New technology from the gaming world has the potential to substantially reduce the cost of adding head tracking to conventional helicopters, as well as the ability to do body tracking and gesture recognition to support future intelligent cockpits," according to the Army's solicitation for the small-business innovation research program on April 25.

Such intelligent cockpits may feature "Minority Report" virtual controls and displays, automatically identify targets a pilot is seeing outside the cockpit, report on damage based on where a pilot looks, or even monitor a pilot's mental and physical health based on his or her motions. That futuristic vision starts with motion-tracking technology.

Having cheaper and more capable motion-tracking technology could especially help military helicopters missing head-tracking systems, such as the Blackhawk, Kiowa Warrior and Chinook. But the same system could also end up helping soldiers inside ground vehicles or at work stations, as well as commercial airline pilots and civilian drivers.

If it succeeds, the Army would only be the latest in a long line of people who have hacked into the Microsoft Kinect's cheap but powerful capabilities. Geeks have harnessed the Kinect's power to make virtual clothes-fitting rooms and rescue robots. Archaeologists have even turned the gaming device into a 3D scanner for exploring ancient cities and burial grounds.