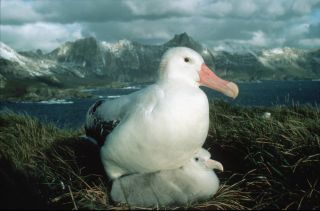 A wandering albatross with her chick on the sub-Antarctic island of South Georgia.
(Image: © copyright Simon Pickering, British Antarctic Survey)

Some wandering albatrosses, the largest of seabirds, have begun breeding earlier than they did 30 years ago, research indicates. While environmental change may be responsible, it's not yet clear how, the scientists say.

The wandering albatrosses that breed on the sub-Antarctic island of South Georgia are laying their eggs an average of 2.2 days earlier, according to the team of British scientists.

One particular type of albatross parent — those that tried unsuccessfully to breed in previous years — appears to be the primary driver behind this trend, said study researcher Sue Lewis at the University of Edinburgh's School of Biological Sciences in a statement.

Others, older birds and those that had recently changed partners, have also been laying earlier.

The 30 years of egg-laying records came from birds living near the British Antarctic Survey's (BAS) research station on Bird Island, which is part of South Georgia.

Wandering albatross have a wing span of as much as 9.8 feet (3 meters) and can weigh as much as 26.5 pounds (12 kilograms). They have the lowest reproductive rate of any bird, laying a single egg in December. The chicks hatch in April and fledge the following November and December.

Afterward, parents take a year off, migrating to feeding areas around the Southern Ocean. Wandering albatross can cover up to 6,212 miles (10,000 km) in 10 to 20 days, according to the BAS.

It's not yet clear if weather, changing ocean conditions or the availability of food is prompting some birds to breed earlier, said study researcher Richard Phillips, a bird ecologist with the Survey. He noted that increasingly strong westerly winds over the Indian Ocean have affected the birds' foraging patterns.

Several albatross species face possible extinction, and the wandering albatross is considered to be a vulnerable species by the International Union for Conservation of Nature and Natural Resources. Conflicts with long-line fisheries are blamed, because the birds swallow baited hooks.

On Bird Island, the wandering albatross population has fallen from 1,700 breeding pairs in the 1960s to 800, according to the BAS.

The research was published online April 4 in the journal Oikos.