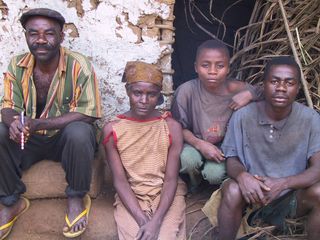 Members of a village in Cameroon who are Pygmies.
(Image: © Evan Leach)

Why the Pygmies of West Africa have such short stature, while neighboring groups don't, has been somewhat of a mystery. Now new research suggests unique changes in the Pygmy's genome have both led to adaptations for living in the forest as well as kept them short.

Researchers analyzed the genomes, the "building code" that directs how an organism is put together, of Western African Pygmies in Cameroon, whose men average 4 feet, 11 inches tall, and compared them with their neighboring relatives, the Bantus, who average 5 feet, 6 inches, to see whether these differences were genetic or a factor of their environment.

"There's been a long-standing debate about why Pygmies are so short and whether it is an adaptation to living in a tropical environment," study researcher Sarah Tishkoff of the University of Pennsylvania said in a statement. "Our findings are telling us that the genetic basis of complex traits like height may be very different in globally diverse populations."

Some Pygmy women, after having sex with a Bantu man, have given birth to half-Bantu babies, a phenomenon that integrates Bantu genes into the Pygmy population. These women and their offspring stay in the Pygmy village, and so don't mix with the Bantu. However, offspring resulting from mating between a Pygmy man and Bantu woman are rare, so the Bantus don't have many Pygmy genes.

The researchers analyzed the genomes of 67 Pygmies and 58 Bantus for changes that would provide information about an individual's ancestry. These changes are small, nonharmful misspellings in the code (the chemical bases A, C, T and G) that makes up the genome. For example, a Bantu might have an A where a Pygmy has a T.

By analyzing large numbers of these changes, researchers can tell how much of an individual's genome is Bantu and how much is Pygmy.

The researchers also used this letter-change data to look for areas of the genome associated with height and those that were "naturally selected" for — parts of the genome that are passed down through the generations because they provide some sort of survival advantage.

The data revealed height had a genetic component related to Bantu ancestry: The more Bantu ancestry an individual from the Pygmy tribe had, the taller that individual tended to be. One part of the genome, on chromosome 3, was especially important in this trait, the researchers said.

"We kept seeing a lot of them [these single-letter differences] highlight that region in chromosome 3," Tishkoff said. "It just seemed like a hot spot for selection and for very high differentiation and, as it turns out, very strong association with height as well."

The researchers zoomed in on the genes in this area of the genome. One of the genes they found had already been associated with height changes in other populations, but the rest hadn't.

They found new changes in hormone pathways and immunity that seemed to correlate to the pygmy's short stature. These could have been selected for because of their influence on height or because changes in these genes play other roles in the body that were advantageous to the Pygmies, Tishkoff said.

For example: An immunity component might be selected for because it helps the pygmies fight off infections, which are prevalent in their habitat. And the link to hormone pathways also makes sense, Tishkoff said, because changes to them could help the Pygmies reproduce at earlier ages. Shorter height could just be a byproduct of these changes.

The study was published Thursday (April 26) in the journal PLoS Genetics.