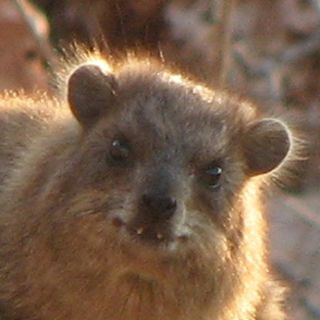 Male hyraxes "sing" long and complex songs and form regional dialects; nearby colonies have songs that are more similar than distant ones.
(Image: © Arik Kershenbaum)

"We aren't claiming they have a language," study researcher Arik Kershenbaum, of the University of Haifa, in Israel, told LiveScience. "But they are showing some of the characteristics that are essential for true language."

The rock hyrax is a small, sturdy mammal that lives in Africa and the Middle East and, strangely enough, is a relative of the elephant. It eats plants and possibly bugs and lives in small groups, usually dominated by one male. This male has a tendency to stand up and shout — singing songs that are complex and can go on for "a number of minutes," Kershenbaum said.

The songs also seem to be a form of self-advertisement, kind of like birdsong.

Kershenbaum and colleagues recorded and analyzed 549 of these calls from hyraxes throughout Israel. Instead of analyzing the pitch or frequency of the calls, they looked at their syntax — how each animal puts together a series of different syllables (like the wail, chuck, snort, squeak and tweet) to make a song. They usually combine about 30 different syllables, or notes, for a song. [Smarty Pants! 10 Brainy Animals]

They found that as each animal called, they were mixing together different notes in new ways every time they sang. They also found that their neighbors seemed to mimic their style — forming a regional "dialect." The farther away any two hyrax lairs were, the less likely it was that the two would have similar calls.

"This seems to imply there is some sort of copying going on, and there is a cultural transmission from one hyrax to another," Kershenbaum said. "One young male might want to make his songs sound like a nearby strong male."

These dialects are created and maintained by social learning, but they aren't a language. The complexities of the calls probably carry some information on a given male's fitness, but the syntax, the arrangement of different notes, doesn't carry such information.

Still, the fact that they are able to detect, separate and repeat these differences in syntax is a characteristic that does play a role in the development of language, and it's interesting to see such abilities in such a primitive mammal, the researchers said.

"No one really thought to look for complex syntactic structures in mammals that clearly don't have a language of their own, but it's important to look for it there because that may be where it all began," Kershenbaum said. "Somewhere along the evolutionary scale animals began to use syntax, and likely they began to use it in an arbitrary way. It allowed them to develop a system of being aware of the sequence of the notes they are singing."

This study will be published tomorrow (April 18) in the journal Proceedings of the Royal Society B: Biological Sciences