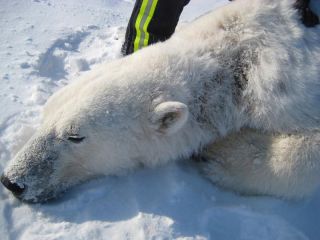 This polar bear, captured and immobilized by USGS scientists, shows hair loss and oozing sores on the left side of its neck. The cause of the alopecia and lesions is still unknown.
(Image: © USGS)

Over the past two weeks, nine polar bears have shown up in the southern Beaufort Sea region near Barrow, Alaska, with patches of fur missing and skin lesions, say scientists with the U.S. Geological Survey who are perplexed by the cause of the odd symptoms.

The animals were otherwise healthy in appearance and behavior, according to the USGS, whose scientists first noticed the patchy polar bears during their annual monitoring of the animals in the Beaufort Sea region; this polar bear population stretches from Barrow, Alaska, east to the Tuktoyuktuk region of Canada.

The skin symptoms can be tricky to see unless the bear is observed up close, USGS scientists said. But in the polar bears they have observed to date, the most common areas affected include the muzzle and face, eyes, ears and neck.

The researchers aren't sure whether there is a link between the polar bears' skin symptoms — fur loss called alopecia, and other skin lesions — and those reported in other animals in the region.

For instance, last summer, an unusual number of ring seals hauled out onto beaches along the Arctic coast of Alaska, after which scientists found dead and dying seals with hair loss and skin sores. Then this fall, scientists saw Pacific walruses with similar skin lesions hauling out in the same region. Like the polar bears, these walruses appeared otherwise healthy. Since these reports, ice seals with similar symptoms have been reported in neighboring regions of Canada and Russia as well as from the Bering Strait region.

Extensive tests for a wide variety of well-known infectious diseases didn't turn up the cause of the observed condition in walruses and ice seals. Scientists are now testing for "unknown" agents as well as looking for any links to man-made and natural biotoxins, radiation, contaminants, auto-immune diseases, nutritional, hormonal and environmental factors.

The researchers are now in the field collecting blood and tissue samples, as well as other data, on the afflicted polar bears.