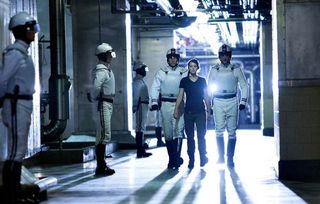 Tomorrow's world of "The Hunger Games" doesn't just showcase the reality TV spectacle of teenagers battling to the death — it also features futuristic hovercraft, force fields and bioengineered "Mutt" creatures. Those technological marvels represent tools of oppression for the dystopian nation of Panem, where the Capitol elite live in high-tech luxury supported by the old-fashioned sweat of district coal miners, farm hands and factory workers.

But the popularity of the "Hunger Games" series has not stopped some fans from eying the technological imbalances of the story. Some question why a post-apocalyptic North America filled with futuristic technologies would still rely upon coal for its electricity needs; others wonder about the story's complete absence of the Internet. One character in "The Hunger Games" books complains about "forgotten" military technologies such as high-flying planes, military satellites and robotic drones, even as he rides inside a hovercraft.

Such "gaps" in technology don't necessarily represent plot holes, according to historians of science and technology. Real societies have adopted or rejected technologies based on whether they suited their particular economic, political or cultural circumstances.

"Technology is not pre-determined as "better" — it becomes better when a society deems it to be better or more advanced," said Joline Zepcevski, a researcher with a Ph.D. in the history of science and technology at the University of Minnesota. "With respect to "The Hunger Games," there is no reason why a new society, rising from the ashes of an old society, would necessarily re-invent the same technologies."

Technology has come and gone throughout history, said Marie Hicks, an assistant professor of history of technology at the Illinois Institute of Technology Chicago. Electric cars appeared on U.S. roads at the start of the 20th century, but disappeared for almost a century before making their recent comeback. Supersonic civilian jetliners made their debut with the Concorde in 1976, but ended up grounded in 2003.

Even high-speed trains that took off in Japan, China and Europe have mostly failed to catch on in the U.S. (the Capitol rulers of "The Hunger Games" still have a high-speed rail system).

So why does Panem in "The Hunger Games" feature some technologies and not others? The Capitol rulers may be focused on technologies useful for social control, said Eden Medina, assistant professor of informatics at Indiana University. For instance, the bioengineered "Mutt" creatures become weapons of psychological terror in the Hunger Games — an annual event that forces each of Panem's 12 districts to provide a boy and girl tribute for a televised gladiatorial battle.

The Capitol also puts televisions in every home and big screens in public squares to broadcast the hateful Hunger Games and other state propaganda to the masses. That act echoes both George Orwell's dystopian "1984" story and real totalitarian societies such as North Korea (although North Korea relies more on radio).

By contrast, the Capitol rulers strictly limit phone communication between districts and don't have anything resembling the Internet. Their choice to avoid the Internet seems like a no-brainer, because its ability to give voice to the masses makes it much more difficult to control than television.

"It's hard to say because it's a fictional world and we'd have to ask Suzanne Collins (author of "The Hunger Games"), but it's not outside the realm of possibility that this society would make those decisions," Medina told InnovationNewsDaily. "I'd imagine it might be harder to keep news of a district uprising secret if there's many-to-many Internet communication."

Some are more equal than others

The technological imbalances within "The Hunger Games" also highlight the story's emphasis on social and political inequalities. The repressive Capitol enjoys instantly prepared food, smart household gadgets and obsessing over the latest Capitol couture, Medina points out. By contrast, the "District 12" home of heroine Katniss Everdeen located in today's Appalachia has a poor, starving population that works in the coal mines and suffers from electricity shortages.

"Uneven technological development is a staple of science fiction because it implies a society, and a government, that has lost its way or has mistaken priorities," Hicks said, "And as a result unjustly divides technological resources, or uses those resources to control the populace in inappropriate ways."

By drawing a contrast between the futuristic Capitol's wonders and the dangerous, dirty work of coal mining, "The Hunger Games" may be prompting readers to sense that "some underlying element of this society is in disorder," said Bernard Carlson, a professor of science, technology and society at the University of Virginia.

"If you're [the Capitol] producing energy to make the houses of elite comfortable, and they don't pay the environmental or safety price for it, you might as well use coal as opposed to something else," Carlson said.

In the end, "The Hunger Games" does not celebrate the progress of technology — an idea that historians of science and technology see as overly simplistic anyway. Instead, the books show how a society's technological choices reflect its political motivations and social priorities.

Still, even the historians who have picked up "The Hunger Games" don't judge the story too seriously based on its technological choices. They, too, want to be entertained.