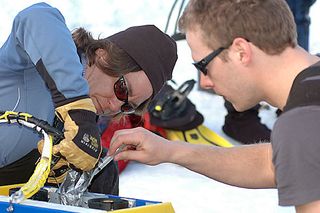 After a full season of diving, the rover began to show signs of wear and tear, a typical problem in Antarctica. Gretchen Hofmann (left) and Tim Crombie, a technician in HofmannÃ¢â‚¬â„¢s lab, affect a Ã¢â‚¬Å“field repairÃ¢â‚¬Â with duct tape.
(Image: © Peter West, NSF)

Shipping and assembling some scientific instruments in Antarctica can cost millions of dollars, thanks in part to the logistics needed to get materials and personnel to the southernmost continent on Earth.

But a relatively meager $5,000 investment returned a wealth of experience for students at a California High School and the research team with whom they are working at McMurdo Station, the National Science Foundation’s logistics hub in Antarctica.

Using “off-the-shelf” materials and working with graduate students and technicians from marine biologist Gretchen Hofmann’s laboratory at the University of California, Santa Barbara (UCSB), two female graduates of Cabrillo High School in Lompoc, Calif., built an underwater, camera-equipped “rover” that appears to be able to meet the challenges of the harshest environments on Earth.

The submersible rig has been dubbed M’RAJE, (pronounced “mirage”), from the first initials of its creators, and it is providing Hofmann and her team with an extra set of eyes to observe fish in their natural environments, a task made difficult in waters frequently covered by many meters of ice.

Hofmann studies the environmental genomics of Antarctic fishes and how they respond to variations in water temperatures, responses that could tie closely to climate change.

For Hoffman, the melding of research and education is a serious priority. M’RAJE was built by Ryan Garner and Amanda Wilson, at the time both high-school seniors at Cabrillo. They worked closely with graduate students Jessica Dutton, Mackenzie Zippay, and Elizabeth Hoaglund in Hofmann’s lab to turn the design into a workable prototype.

“I really like how Gretchen found these girls and emphasized the ‘women in science’ dimension of the project,” noted Dutton, who acted as a liaison between Hofmann’s laboratory and the rover team.

As juniors, both Garner and Wilson were members of a team at Cabrillo that competed and placed highly in the Marine Advanced Technology Education (MATE) Center Remotely Operated Vehicle (ROV) design competition in 2005.

Working with Ali Whitmer, the director of education at UCSB’s Marine Science Institute and Robert Ranard and Shirley Pillus who coached the winning 2005, team, Hofmann encouraged Garner and Wilson to design a rover that was better adapted to polar waters.

“We wanted it to be specifically designed to do research in Antarctica,” said Dutton. “We knew the design would have to take into account things like how a big a hole we are able to drill in the ice,” an access point for the ocean.

Although scuba divers usually assist Hofmann’s team in scouting out the underwater landscape, a successful rover design could compliment the work that human divers can do. For example, the rover has a maximum tether length of 100 feet, which allows it to operate at the outer limits of safe diving.

“We’ve never really been able, ourselves, to look at the habitat down there,” said Dutton. “But we can take a rover out as a team and operate it independently.” M’RAJE made roughly ten successful dives during the last Antarctic research season, between October and December.

Earlier this year, shortly after M'RAJE was successfully tested in the Antarctic, the 2007 international ROV competition, sponsored by the NSF-sponsored Marine Advanced Technology Education (MATE) Center in Monterey, Ca., was held in St. John's, Newfoundland, in Canada. M'RAJE successfully competed in the previous year's MATE competition.