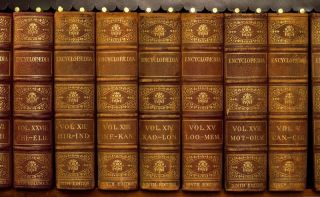 As of yesterday, Encyclopedia Britannica was the oldest English-language print encyclopedia, having existed for more than 240 years.
(Image: © photogl | Shutterstock)

In what might feel like the end of an era for generations of people who grew up with their noses in books, Encyclopedia Britannica announced today (March 14) it will stop printing its flagship 32-volume printed edition in favor of its online publications and apps. The books have been printed for 244 years. Like many media companies, the publisher has been gradually shifting to the digital realm.

"The end of the print set is something we've foreseen for some time," Jorge Cauz, president of Encyclopedia Britannica, Inc., said in a statement. "It's the latest step in our evolution from the print publisher we were, to the creator of digital learning products we are today."

As of yesterday, Encyclopedia Britannica was the oldest encyclopedia, in English, still being produced. The first set was published in Edinburgh, Scotland, in three volumes, between 1768 and 1771. Print editions have remained near constant in their production details, with over 40 million words on over 500,000 topics. It has remained being published in British-English despite being based in the United States since 1901.

[The Evolution of Encyclopedias]

The online edition has won the "Best Online Consumer Information Service" award, the 2005 Codie, for being the best among encyclopedia software. It was a finalist the next year in 2006. Other accolades have included Codie awards in 2000, 2001 and 2002, as well as the 2004 Association of Educational Publisher's Distinguished Achievement Award.

However, the encyclopedia's print version has been criticized in the past for being outdated.

Even with early authors of the encyclopedia such as Marie Curie and Albert Einstein, the critics thought it lacked expertise. There was a book in 1964 detailing the failings by Harvey Einbinder, an American author and physicist, called "The Myth of the Britannica." Even more out-of-date than the print articles, the bibliography of the print editions has been found to be grossly out-dated and lacking in substance.

The majority of the encyclopedia has been broken down into the following topics:

Love the encyclopedia or not, many will miss the giant tomes of knowledge whether we still find the convenience of the online edition pleasing. As Kenneth Kister said in the 1994 Kister's Best Encyclopedias, "It can be stated without fear of contradiction that the 15th edition of the Britannica accords non-Western cultural, social, and scientific developments more notice than any general English-language encyclopedia currently on the market."

Cauz said numerous digital versions of the encyclopedia are widely available, continuously updated and significantly larger than the content in the printed encyclopedia.