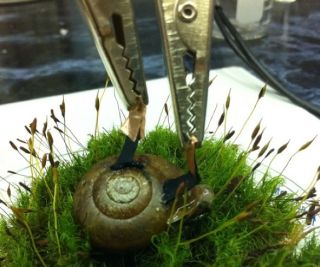 A snail transformed into a living battery has moved the world one step closer to having tiny cyborg spies underfoot.

The pioneering experiment harnessed a snail's blood sugar to "recharge" an implanted battery — the first time researchers have shown sustainable generation of electricity in a living creature's body over several months. If the snails' bodies can create enough electricity to power microelectronics, they could act as living sensors or detectors for the U.S. military and Homeland Security.

"In this [direction] the biofuel cells are expected to operate in small creatures (snails, worms, insects, etc) providing sustainable electrical power for various sensors and wireless transmitters," said Evgeny Katz, a professor of chemistry at Clarkson University in Potsdam, N.Y.

Katz and his colleagues implanted the snail with electrodes made of thin sheets of carbon nanotubes — called Buckypaper — that could conduct electricity. Those electrodes, coupled with certain enzymes, created electricity by using glucose sugar and oxygen circulating in the snail's "hemolymph" blood.

Such a setup allowed the snails to roam freely and live life almost as normally as possible — resting and eating allowed the creatures to build up glucose levels to "recharge" the battery. A new study describing the results is detailed in the March 8 online edition of the Journal of the American Chemical Society.

"Our snail was living for a few months with the implanted electrodes, eating, drinking, moving, etc.," Katz told InnovationNewsDaily. "The snail was fixed for a few minutes to make the electrical measurements and then it was released again to move."

The amount of electricity created was still far below that of just one AAA battery, but Katz's team and its Israeli colleagues at Ben-Gurion University hope to boost the flow of electricity in new experiments. They have also begun testing different substances in the bodies of such small creatures that could power the battery.

The U.S. military's own DARPA research arm has funded research into piezoelectric generators that convert pressure or material stress from the motion of a cyborg beetle's wings into electricity — a tactic that relies upon constant motion from an insect. By contrast, implanted biofuel cells could theoretically keep going as long as the tiny creature's body has enough fuel.

Implanted biofuel cells that run on glucose might also someday power new medical devices inside the human body, Katz explained. But the latest paper focuses more on the animal possibilities.

As a next step, Katz's team plans to hook the living batteries up to microelectronic devices attached to the outside of the creatures' shells or exoskeletons. A cyborg snail or insect could carry video cameras or gas sensors to collect information before beaming it to the home base through wireless transmitters.

"In the future setup the implanted bioelectrodes will be connected to a microelectronic device (sensing and wireless transmitting) fixed at the snail body, and the snail will be released to move as much as it wants," Katz said.