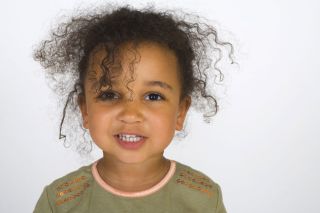 Flying in the face of intuition, scientists now find that curly hair gets less tangled than straight hair.

To learn which kind of hair truly is the snarliest, biophysicist Jean-Baptiste Masson at the Ecole Polytechnique in France had hairdressers count tangles for a week in the hair of 212 people—123 with straight hair and 89 with curls. Counting was conducted between 4 p.m. and 7 p.m., so that hair had a chance to snag during the day.

To investigate further, Masson devised a geometrical model of hair that might explain the results. Although straight hairs interact less often with each other than curly hairs do, his math suggests that when straight hairs do rub against each other, they often do so at steep angles that cause tangles.

Masson noted that Velcro essentially involves hairy fibers getting tangled up with each other, and that his findings could lead to advances "in Velcro-like technology," he told LiveScience. For instance, researchers could try increasing the tension of Velcro fibers, essentially making them straighter.

Masson detailed his findings in the August issue of the American Journal of Physics.