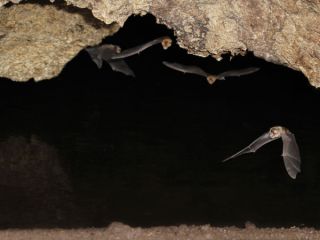 Scientists have found the first flu virus to infect bats, among little yellow-shouldered bats in Guatemala. The bats above are a different species and were photographed in Kenya.
(Image: © Ivan Kuzmin | shutterstock)

Scientists have found a new influenza virus that infects bats.

But don't pull out the hand sanitizer leftover from the H1N1, or swine flu, pandemic just yet. When asked about the implications of this discovery for human health, one of the researchers, Ruben Donis, said: "It's still too early to tell."

We still don't know that this bat flu virus can infect people, according to Donis, who is chief of the molecular virology and vaccines branch in the influenza division at the U.S. Centers for Disease Control and Prevention.

He and a team of American and Guatemalan researchers isolated the virus from fruit-eating, little yellow-shouldered bats in Guatemala. So far, there is no evidence the newly discovered virus is causing illness among the bats.

The new virus belongs to a family of flu viruses called Influenza A. Birds are natural hosts for these viruses, but they are found in other animals, too, including pigs, horses, seals and whales — and of course, humans, according to the CDC. The flu viruses that cause pandemics generally emerge from infected animal populations, Donis said. [Predicting the Next Major Virus]

While bats so far haven't been known to contribute to human flu, they have been found carrying a number of diseases that can affect both us and domestic animals, including Severe Acute Respiratory Syndrome (SARS), rabies and hemorrhagic Marburg virus.

Bats' global distribution, abundance, social lifestyle and ability to fly long distances make them well-equipped to acquire and spread viruses, write Donis and his colleagues in an article published today (Feb. 27) in the journal Proceedings of the National Academy of Sciences.

Influenza A viruses are named using an H and an N, as in H1N1, with each letter representing a protein on the surface of the virus, hemagglutinin and neuraminidase, respectively. The bat virus' H protein is unique enough to warrant a new designation, H17, and the bat virus' N protein appears to be more ancient than those of all other Influenza A viruses as well as that of Influenza B, which infects only humans.

The researchers were unable to grow the virus in the lab, but they did find that components from the bat flu virus could be mixed and matched with those of a human flu virus (an H1N1 virus isolated in 1933). This means the bat virus should be capable of a process called re-assortment, in which different flu viruses that have infected the same cell switch parts, creating a new virus with new properties. This process has generated pandemic strains, such as the 2009 H1N1 pandemic, dubbed swine flu.

It's not clear this could happen in nature, however, because it would require bat flu and a human-infecting virus to infect the same animal at the same time, and scientists don't know how likely it is for that to happen, according to Donis.