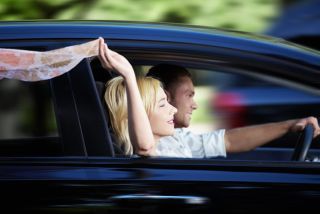 A study found that drivers of upper-class cars cut off other cars and pedestrians more often than those cars indicating lower socioeconomic status.
(Image: © Deklofenak | Shutterstock)

The cream of society may rise to the top, but so might the scum — researchers now find that people in the upper crust may be more likely to engage in lying, cheating and other kinds of unethical activity than those in lower classes.

"We're not saying that if you're rich, you're necessarily unethical, and that if you're poor, you're necessarily ethical — there are lots of instances of increased ethical conduct among upper-class individuals, such as the tremendous philanthropy of Warren Buffett or Bill Gates," said researcher Paul Piff, a social psychologist at the University of California, Berkeley. [The World's Greatest Minds]

Asking which group might be unethical the most often in a society would seem like an easy way to start a fight. Still, confronting such a challenge might help address the roots of many ills, shedding light on rule-breaking that can have can have important consequences for society.

Researchers focused on social class — a person's relative standing in society in terms of wealth, occupational prestige and education. Lower-class folk, living with fewer resources, might seem more driven to behave unethically to improve their lot, the researchers suspected. However, upper-class individuals, having greater resources, might have more latitude to focus solely on themselves, giving rise to unethical behavior.

In two tests conducted in a natural setting, scientists examined a simple example of unethical behavior on the road — how likely it would be for drivers in the San Francisco Bay Area to cut in front of other vehicles at a busy four-way intersection and cut off pedestrians at a crosswalk. They estimated the social class of drivers based on vehicle make, age and appearance, and discovered that drivers of upper-class cars cut off other cars and pedestrians more often.

Four lab tests that included undergraduates at Berkeley and national online samples of adults revealed those who considered themselves upper class had greater tendencies to make unethical decisions. This included unrightfully stealing something, lying in a negotiation, cheating at a game of chance to boost their chances of winning cash or endorsing unethical behavior at work, such as stealing cash, receiving bribes and overcharging customers.

"This isn't just a case of upper socioeconomic people being more willing to admit that they would be unethical," Piff said. "We actually measure cheating behavior — not just 'Would you do something unethical' but 'Do you do it?'"

Are some rich people inherently evil?

Another lab experiment revealed that unethical behavior was not necessarily inherent to individuals. The researchers had volunteers compare themselves with people with the most or least money, education and respected jobs, thereby subtly putting them into the mindset of someone with a relatively low or high socioeconomic status. When then presented with a jar of candy ostensibly for kids in a nearby lab, those made to feel as if they were upper class took more candy that would otherwise go to children, findings that suggest the experience of higher social class might nudge one to act unethically.

"If you take lower socioeconomic status people and just change their social values very subtly, they'll act just as unethically as upper-class individuals," Piff said. "The patterns of behavior naturally arise from increased wealth and status compared to others." [Infographic: Who Has the Money & Power?]

These findings dovetail with other studies that also suggest more unethical behavior in the upper class. "A 2008 study of shoplifting found that upper-income and more educated participants were way more likely to have reported shoplifting in their lives — that's self-reported data, admittedly, but still interesting," Piff said. "Also, upper-income individuals are more likely to report having sped or breaking the speed limit."

"Juveniles of upper socioeconomic status are just as likely to engage in delinquent patterns of behavior as those of lower socioeconomic status, but they're driven by different things," Piff added. "Lower socioeconomic-status juveniles report that alienation and ostracization from communities and increased need leads them to commit certain types of transgressions, while wealthier adolescents report increased willingness to take risks and an increased sense of power and entitlement."

Other studies have shown that upper-class individuals are often less cognizant of others, worse at identifying the emotions others feel, less generous and altruistic, and more disengaged socially — for instance, checking their cellphones or doodling on paper during social interactions. Such research might support these new findings — it may be easier to act unethically toward others if you are not thinking about how they feel.

Piff said he expected this work to stir controversy, adding that the experiment was controlled for participants' political orientation.

When it comes to notions that lower-class individuals are more likely to engage in violent crime and criminality overall, "when I dug into research on how violent offenses vary according to socioeconomic status, a lot of the findings were counter-stereotypical — it's really a mixed bag, and not as consistent as you might think," Piff said. "There's no correlation between per capita income and per capita violent crimes and property crimes."

Why the rich exhibit unethical behavior

"You can think of this self-perpetuating cycle, where promotion of self-interest increases status in society, which further increases willingness to behave unethically," Piff said. "It may help explain the runaway rise in inequality in the last 50 years, at least in this country."

Still, "we're not arguing that self-interest is a bad thing," Piff said. "Self-interest gets you to go to work, is a fundamental human imperative, guides a lot if not all social behavior — even the most altruistic acts may ultimately be self-serving to some degree. But when allowed to go uncurbed, self-interest is what gives rise to breaking the rules."

"It's not that hard to reverse these patterns of behavior," Piff added. "Even a simple reminder of the needs of other people actually does a lot to change patterns we'd otherwise document. As Warren Buffett said, the rich aren't necessarily bad — they just need to be reminded of that."

Future research can focus on perceptions of class conflict and class struggle. "For instance, how do views of the Occupy movement differ depending on status in society?" Piff asked. "Also, if an increase in socioeconomic status can lead to a decrease in altruism and ethical behavior, how can these patterns be changed?"

Piff and his colleagues detailed their findings online Feb. 27 in the journal Proceedings of the National Academy of Sciences.