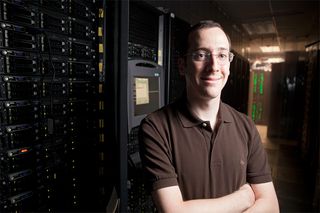 This photo was taken in the Cornell Center for Advanced Computing's (CAC) server room. Scott Golder used the resources of the CAC to store and process data from Twitter.
(Image: © Lindsay France, Cornell University Photography)

The Internet is a sociologist's playground, says Scott Golder, a graduate student in sociology at Cornell University. Although sociologists have wanted to study entire societies in fine-grained detail for nearly a century, they have had to rely primarily upon large-scale surveys (which are costly and logistically challenging) or interviews and observations (which provide rich detail, but for small numbers of subjects). Golder hopes that data from the social Web will provide opportunities to observe the detailed activities of millions of people, and he is working to bring that vision to fruition.  The same techniques that make the Web run—providing targeted advertisements and filtering spam—can also provide insights into social life. For example, he has used Twitter archives to examine how people’s moods vary over time, as well as how network structure predicts friendship choices. Golder came to sociology by way of computer science, studying language use in online communities and using the Web as a tool for collecting linguistic data. After completing a B.A. at Harvard and an M.S. at the MIT Media Lab, he spent several years in an industrial research lab before beginning his Ph.D. in sociology at Cornell. Learn more about Golder as he answers the 10 ScienceLives questions below.

Field of Study: Sociology What inspired you to choose this field of study? The main subfield I have chosen to work in is social network analysis, which is interested in how people's social ties (friends, family, coworkers, and so on) differentially affect their lives in many ways, including their happiness, health, socioeconomic outcomes, etc.  The reason I chose to work in this area is that it highlights the importance of social structure, despite the fact that this structure is largely invisible.

What is the best piece of advice you ever received? Following advice is often pretty dangerous! Even when advice givers mean well (and they usually do), their advice is often based on their own experiences; if things worked out the way they like, they feel as though they made a good choice, and if not, they don’t.  This is wrong twice: First it overemphasizes the person rather than the circumstances; and second, it pays no attention to the random elements that shaped the outcome.  An "N of 1" is not nearly a large enough sample!

Therefore, I try to learn from many people, and I prefer to select on traits rather than individuals.  One big question many people have is whether they should take "time off" between undergraduate and graduate school or begin graduate school right away.  This is a hard decision that many people have strong—and differing—feelings about.  I thought that taking "time off" was personally a good choice, but I came to that decision after looking around at people who I thought well of and inquiring with them, rather than taking unsolicited advice.

So the best advice I can give is, don't take advice.  How's that for a paradox?

What is your favorite thing about being a researcher? I like having a large measure of control over what I work on, and the freedom to pursue new things as they come up; if I get a good idea tomorrow, I can divert my attention to the next week to work on it. Also, working on several projects at different stages and using different methods [simultaneously] is important to me. If I get tired of data analysis for one [project], I can switch to programming or writing prose for another [project]. Researchers are by nature curious people, and the career path we've chosen lets us exercise those creative muscles.

What is the most important characteristic a researcher must demonstrate in order to be an effective researcher? Perfectionism isn't a virtue. It's possible to mis-spend a lot of time trying to run the perfect model or write the perfect paragraph the first time. This is daunting, and you can spend a lot of time staring at a blank screen. Better to improve an initially rough product through incremental advances over a number of iterations, especially if you seek feedback from colleagues periodically.

What are the societal benefits of your research? Most of my work involves studying the social Web. It is quite commonplace now (at least here in the United States) for people to use the Web to keep in touch with family and friends, shop, find dates and jobs, and so on. This has led to an explosion in the creation of large records of behavioral data.  However, this data has primarily been used in the service of marketing and advertising. I am of the opinion that, if the masses are contributing to the creation of this data through their participation in Web services, then the data should also be used in ways that benefit that public, namely through use in social science research.

Who has had the most influence on your thinking as a researcher? One of my favorite sociologists is Erving Goffman, a social psychologist who was most active in the 1950s and 1960s. More insightful than rigorous, at least by today’s standards, his books and essays covered topics like impression formation and status. He had a gift for deriving great insights from looking at the everyday — something I think we should all try to emulate.

What about your field or being a researcher do you think would surprise people the most? I think non-researchers don't realize how uneven the pace of progress is. Sometimes you can make a tremendous amount of progress in a single day, and other times you bang your head against the wall for weeks. Some projects go on for years. The reason for this is that researchers are generally trying to do something novel all the time. That means there are lots of false starts. That also means there often aren't established processes or even the necessary tools so those have to be built first. (Many people I know, myself included, spend tons of time writing smallish programs to [process] their data.)  On this score, social scientists actually have it easy; we may require custom software, but little in the way of hardware, like some lab or field sciences.

If you could only rescue one thing from your burning office or lab, what would it be? Probably nothing!  I keep all of my work "in the cloud" using an online storage service and keep both my laptop (office) and desktop (home) synced to it. This means that all my work is stored in multiple places, minimizing the risk of loss in case of hard drive failure or even fire.

What music do you play most often in your lab or car? When I’m working, what I listen to depends on the kind of work I'm doing. If I’m writing prose or analyzing data, I generally prefer complete quiet, or maybe the white noise of a low fan or air purifier. When I'm programming, I like either instrumental or electronic music.

When I go on longer car trips, I listen to comedy albums. I'm a huge fan of standup comedy (and perform my own material once in a while) and I think comedians and sociologists have a lot in common, including the ability to look at the world and figure out what’s weird about it.

Editor's Note: The researchers depicted in ScienceLives articles have been supported by the National Science Foundation (NSF), the federal agency charged with funding basic research and education across all fields of science and engineering. Any opinions, findings, and conclusions or recommendations expressed in this material are those of the author and do not necessarily reflect the views of the National Science Foundation. See the ScienceLives archive.