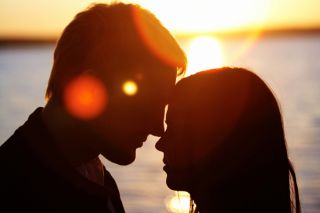 Deep inside, your mind may already be made up about the fate of your relationship.
(Image: © Dmitriy Shironosov | Shutterstock)

When you're in the early stages of falling in love, you might hide it from friends and family. But you can't hide it from neuroscientists. By charting brain activity with an fMRI (functional magnetic resonance imaging) machine, scientists can spot telltale regions of your brain glowing joyously when you look at a photograph of your beloved.

But new research suggests that neuroscientists can tell you much more than what you already know (that you're madly in love). Like fortune-tellers who read brains instead of palms, they have begun to figure out how to determine the fate of your relationship by studying your brain activity alone. And armed with the knowledge of the brain responses they're looking for, you too may be able to find clues in your own behavior as to whether you and your loved one will be happily married years from now, or bitterly separated and wondering why it all fell apart.

Not all in-love brains look alike. Several years ago, Xiaomeng Xu, now a postdoctoral fellow at Brown University School of Medicine, and her colleagues performed fMRI scans on 18 Chinese men and women who reported being in the early stages of romantic love. Though all the study participants showed clear signs of love — looking at the face of their beloved triggered a flurry of activity in the areas of their brains involved in reward and motivation — the researchers identified subtle differences between the individuals' brain scans. When the team followed up with the study participants 18 months later to learn how their budding relationships had turned out, they found a surprisingly strong correlation between certain characteristics in the original brain scans and the participants' relationship status a year and a half later. [13 Scientifically Proven Signs You're in Love]

The team detailed its results in the journal Human Brain Mapping in early 2010. Now, another two years have passed, and the researchers have contacted 12 of the original study participants. Half of the participants are still in the relationships they had just begun at the time of the brain scans three and a half years ago; the other six aren't. Among the admittedly small sample, there is a striking divide between the original brain activity of the people whose relationships lasted and those whose relationships fell apart.

"Even with this small number of people, the results are really interesting," said Lucy Brown, a leading expert on the neuroscience of love at Albert Einstein College of Medicine and a member of the research team.

Two key aspects of the participants' brain activity correlated with their relationship longevity, Brown said. Among the people whose relationships became long-term, looking at a picture of their beloved "caused a decrease in activity in regions that we associate with making judgments, and also a decrease in activity in systems associated with a person's sense of self," she said. "Sense of self" can be thought of awareness of one’s own existence, interests and desires.

These two brain responses, and the associated behavioral traits, suggest that a promising relationship is one in which people refrain from judging their new partners, and instead, tend to overrate them, even finding the positive aspect of a patently negative trait. A promising new romance is also one in which people give great importance to their loved one’s interests and desires, even to the subjugation of their own. Both these tendencies seem to be "a huge help in the longevity of a relationship," Brown told Life's Little Mysteries, a sister site to LiveScience.

The researchers plan to conduct a larger-scale study to see if the correlation between relationship longevity and the two fMRI signatures — corresponding to the two behavioral traits — is as strong as their small data set implies. They also intend to investigate whether certain people more easily exhibit the traits in question, and are thus inherently more suited to long-term attachments, than others.  "We would like to know, 'Does relationship longevity depend on the other person, the relationship or who you are?'" Brown said. "A lot of it may be who you are." [Why Do We Have Sex?]

Similarly, new work indicates that what might be fortuitous in a new relationship doesn't necessarily bode well later on.

According to brand-new work by Bianca Acevedo, a postdoctoral researcher at Cornell University, the characteristics identified by Xu, Brown and their colleagues point only to a happy future when exhibited by brand-new couples. When it's time to get married, your brain needs to change its ways.

Acevedo did fMRI scans of newlyweds who had been with their partners for an average of four years. She looked for correlations between their brain responses and how happily married they said they were one year later. Many of the study participants reported feeling less in love with their new husbands or wives after a year of marriage, but some actually reported feeling more in love. She focused on the latter set. "The question was, is there any activation around the time of the wedding that's associated with an increase in love over the first year of the marriage," Acevedo said.

Unlike people in the early stages of a relationship, in the case of newlyweds, "it's a good sign to have heightened activity in the areas of the brain associated with the representation of ourselves and others," Acevedo said. "In particular, it was a good sign to see activity in areas that are part of the mirror neuron system. The way this works is, if you stretch your arm out, we see neurons firing in these areas, but if you see someone else stretching their arm out, the same neurons fire off. So this idea of including the other in the self — when looking at a picture of your partner causes activities in these areas — this predicts an increase in love over time."

Furthermore, unlike the study of brand-new relationships, in which a tendency to overrate your partner indicates that your relationship with them will last, Acevedo's study of newlyweds found that activation of the brain regions involved in judgment and decision-making correlated with an increase in love over the course of their first year of marriage. "It's true that when people show nonjudgment in the beginning of their relationships, that helps them get hooked on that person. That's OK in the beginning, but later, it's important to see things clearly when you're stepping into a lifelong commitment," she said.

Taken altogether, the new research suggests the following: Selflessness and idealizing your partner will carry you through the first few years of romance. Later, when things get serious, your sense of self must re-blossom, but it must now be intimately tied together with your sense of your partner. And at that point, assessing him or her accurately — accepting the good with the bad — bodes well for a happy marriage.