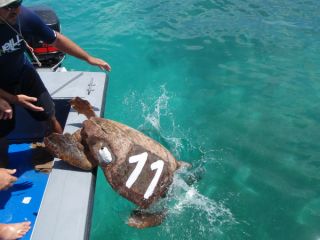 A threatened loggerhead male plunges back into the coastal waters of Dry Tortugas National Park, newly equipped with gear that allows scientists to track his location. It also sports an identifying number – 11 – that is designed to gradually wear off.
(Image: © USGS)

Satellite tracking of a threatened species of sea turtle has revealed two new feeding hotspots in the Gulf of Mexico that are an important habitat for at least three separate populations of the turtles.

The two sites are located in the open waters off the coast of southwest Florida and the northern tip of the Yucatan Peninsula, according to the new study. A team of scientists found the sites by tagging and tracking loggerhead sea turtles. The researchers' goal was to synthesize tracking data from three genetically distinct loggerhead populations to learn more about how they use the Gulf of Mexico.

These loggerheads' regular habitat will aide marine planning and management for this species, whose populations in the Gulf of Mexico are well below historic levels. Recently, loggerheads have continued to decline drastically in some areas.

The newly discovered maritime feeding grounds also hold the first clues about how loggerhead sea turtles spend time at sea, which is most of their lives.

"Up until now, management actions that affect loggerheads have often focused on their limited time at nesting beaches, or on fisheries regulations," said study-team member Kristen Hart of the U.S. Geological Survey (USGS). "Our findings open up important new options for marine habitat conservation, and provide valuable geographic data that can be used to strategically locate marine reserves based on the best available science, as called for in the new National Ocean Policy."

Researchers intercepted female loggerheads after their nesting forays to beaches and outfitted them with satellite tags at study sites in the Florida Panhandle, Casey Key in southwest Florida, and Dry Tortugas National Park. They then tracked the females' migrations and used a new method to determine precisely when they had arrived at "hotspot" foraging areas, in two geographically different locations.

Seven female turtles migrated to foraging sites off Southwest Florida, while the other three took up residence at foraging sites off the Yucatan. Once the researchers applied a new method for synthesizing their satellite-tracking data, it became clear that the loggerhead turtles from all three populations consistently converged around two common sites. This confirmed a hunch that the researchers had developed after years of tracking turtles.

At both of the feeding hotspots, turtles selected individual sites where they foraged in shallow or nearshore waters less than 164 feet (50 meters) deep. Turtles appeared to prefer their own distinct territories, where they tended to stay put. This suggests it may be possible to accurately predict where sea turtles will feed, information that will prove vital for managers looking to focus conservation efforts on prime foraging habitat.

Researchers don't yet know what attracts loggerheads from around the Gulf to these specific feeding areas, although generally, loggerheads forage on the bottom of the sea floor for crustaceans such as crabs, lobsters, clams or conchs.

"The logical next step is to investigate what makes these particular sites prime foraging grounds by mapping and sampling the habitat types found on the sea floor," Hart said. "It would also be useful to tag loggerheads at these foraging sites to confirm how long they reside in these areas, or, alternatively, to see where they go next."

The study was published recently in the journal Biological Conservation.