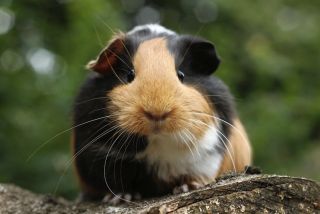 Spanish explorers brought guinea pigs back from the New World to Europe, where they were kept as exotic pets.
(Image: © Miroslav Hlavko, Shutterstock)

It may seem a prestigious post for a rodent, but the guinea pigs that are fixtures in elementary school classrooms today were once ambassadors from a new land.

The third-ever guinea pig skeleton found in a European archaeological dig confirms that these little squeakers voyaged to the Old World very shortly after Spain conquered Peru in 1532. While the guinea pigs, also known as cavies, served as food in South America, they seem to have been treated as pets in Europe. They may have even been a privilege reserved for the relatively well-off, at least at first.

That was lucky news for at least one guinea pig whose skeleton was newly unearthed in Mons, Belgium, before the construction of a parking garage in the city. Excavations revealed the current city is built on top of an older village established in medieval times. The spot where the parking garage was to be built was once a sort of medieval suburb — a residential district right outside the town center.

In the cellar of one of the well-appointed homes in this district, researchers uncovered eight guinea pig bones, likely all from the same animal. Because the bones weren't scattered about, hacked or gnawed upon, the archaeologists are confident the critter was given a proper burial befitting a family pet, not stewed and eaten. [8 Grisly Archaeological Discoveries]

The archaeological site dates to the end of the 1500s or early 1600s, a range corroborated by radiocarbon dating of the bones. (This method dates material based on the decay rate of its radioactive carbon.) The researchers also analyzed isotopes in the cavy's bones, because these atomic variants can give clues as to an animal's diet. They found that the guinea pig was likely born and raised in Europe — no big surprise, given that guinea pigs as young as 3 months can have pups, and pregnancies last only about 65 days. It wouldn't have taken long for imported pigs to go native.

Just as people today might dump leftover salad in their guinea pig's cage, the owners of this 400-year-old cavy likely fed it scraps from the table, the isotope analysis suggested.

Researchers have known from historical texts that domesticated guinea pigs came to Europe soon after explorers made it to the New World. But this find is the first to be radiocarbon dated. Only two other guinea pig skeletons have turned up in archaeological digs in Europe (excluding modern pet graves, of course). One, from the early 1800s, seems to have been used for dissection at the Royal London Hospital. The other, which dates to 1574 or 1575, was found at Hill Hall Manor in Essex, England. That pig had quite the ritzy digs: The owner of the mansion, Thomas Smith, was ambassador to France. His status may have made it easy to get what was then considered an exotic pet.

The spread of the cavy

But the discovery of a piggie pet in a middle-class household around the same time as the other two suggests that, true to their rodent nature, guinea pigs bred and spread quickly in Europe.

"The occurrence of [a] guinea pig in a late 16th century context of a manor at Hill Hall, Essex, owned by a member of the royal court, suggests that it was a prestigious animal," Fabienne Pigière of the Royal Belgian Institute of Natural Sciences and colleagues wrote in the upcoming April issue of the Journal of Archaeological Science.

"However, the finds from Mons indicate that the middle class was also able to purchase guinea pigs, which could be related to the rapid spread of this prolific animal after its introduction in Europe, making it accessible to several classes of the population."