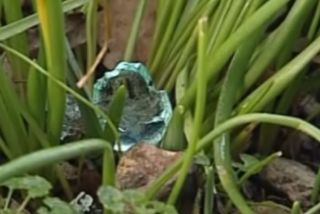 Chemists plan to analyze the strange blue globules, which seem to have just appeared in a backyard in England.
(Image: © Screengrab, BBC Video)

A man in Dorset, England, recently found about two dozen mysterious clear blue gel balls in his backyard, setting off an international mystery. Steve Hornsby claimed that the globules, each about an inch in diameter, fell into his garden during a brief rainshower last week.

Though Hornsby didn't actually see the balls drop during the shower, he believes they were not in his garden before the storm (since his wife didn't mention seeing them). He found the odorless globules to be very slippery and difficult to pick up, requiring a spoon to collect them.

Speculation about the strange substance has run rampant; Hornsby thought they might have been created by air pollution that had somehow solidified. Some speculated they were fish eggs that had somehow been picked up and dropped during the storm by a passing flock of birds. Others thought they might be related to UFOs or extraterrestrials; at least one person wondered if angels might poop clear blue gel pellets.

Researchers from nearby Bournemouth University took the balls for study and have been able to rule out some of the more implausible explanations. The Guardian newspaper quoted a research assistant named Josie Pegg as saying that "Now that we have possession of a sample we can rule out some of the early guesses. Having examined the balls under a high-powered microscope, we can discount living material."

So whatever they are, they're not organic and therefore not eggs.

One clue as to the blue balls' identity can be found in the precise location they were found: only in the Hornsbys' garden. None were found on the roof, in other yards, or on nearby roads. Obviously if the strange stuff had fallen from the sky they would have been found on roofs and over a wider area.

The best guess so far: small clear colored balls of a hydrating gel called sodium polyacrylate, which are commonly used by florists to keep fresh cut flowers preserved and salable. The gel can absorb hundreds of times its weight in water, and slowly releases the moisture without rotting the flower stems.

Why might they be in the Hornsbys' garden? Perhaps they were spilled, unnoticed, by someone who was cutting flowers and putting them in water-and-gel-filled vases. Perhaps a neighborhood kid or pranking tosser got ahold of the blue balls and threw them over Mr. Hornsby's fence for a bit of sport.

However they got there, the identity of the mysterious balls should soon have an answer, as a chemical analysis is being performed to finally solve the mystery.

This story was provided by DiscoveryNews.