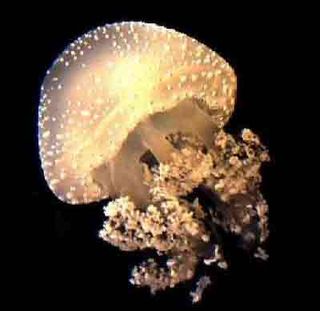 The Australian spotted jellyfish, Phyllorhiza punctata, have invaded the Gulf of Mexico. With plenty of food, they grow as big as dinner plates and weigh up to 25 pounds (11 kilograms), although in their native waters they tend to be much smaller. They are not dangerous to humans, but pose a threat to shrimping and fishing industries.
(Image: © Dan Martin/Dauphin Island Sea Lab)

Australian jellyfish that invaded the Gulf of Mexico seven years ago have made a "vigorous reappearance" this summer and threaten to devour native fish, scientists announced Friday.

And in the Gulf, with plenty to eat, they grow to monster size.

"In their native waters, they tend to be fist-sized," said Monty Graham of the Dauphin Island Sea Lab. "Here in the Gulf, they can be a big as dinner plates.”

The creatures can weigh up to 25 pounds.

The Australian spotted jellyfish, Phyllorhiza punctata, are not dangerous to humans. But scientists say the invasion could pose a threat to the fishing and shrimping industries. The jellies foul trawling nets and eat eggs and larvae of other fish.

The invasive jellyfish have been found in the Gulf since 2000 but in small numbers. This year, there are more of them, and their range has extended up to the Mid-Atlantic states.

Jellyfish can be carried around the globe when they attach to ships. Other studies have found that species of moon jellyfish are invading seas all over the planet. Another study finds jellyfish are opportunists, moving in and taking over regions of the sea that humans overfish.