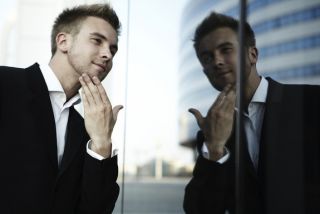 Narcissism — excessive love of oneself — is more than just an unattractive trait, new research indicates it may be physically damaging for men.

This does not appear to be the case for women, however, the study of 106 undergraduate students found.

As a personality trait, narcissism is characterized by a sense of grandiosity, entitlement and low empathy.

The researchers also measured levels of a stress-related hormone, cortisol, in the students' saliva at two different times under relatively stress-free conditions.

They found that higher unhealthy narcissism was associated with higher levels of cortisol in men. The relationship between the two was much weaker in women. This is problematic for the men because the elevated cortisol levels indicate chronic activation of the body's stress-response system, which can increase the risk of cardiovascular as well as other problems. Healthy narcissism scores were not related to cortisol levels.

It appears narcissism is stressful, according to study researcher David Reinhard of the University of Virginia.

"Even though narcissists have grandiose self-perceptions, they also have fragile views of themselves, and often resort to defensive strategies like aggression when their sense of superiority is threatened," Reinhard said in a press release issued by the University of Michigan. "These kinds of coping strategies are linked with increased cardiovascular reactivity to stress and higher blood pressure, so it makes sense that higher levels of maladaptive narcissism would contribute to highly reactive stress response systems and chronically elevated levels of stress."

Gender roles may put men at particular risk, according to study researcher Sara Konrath, a University of Michigan psychologist.

"Given societal definitions of masculinity that overlap with narcissism — for example, the belief that men should be arrogant and dominant — men who endorse stereotypically male sex roles and who are also high in narcissism may feel especially stressed," she said in the release.

The study was published Monday (Nov. 23) in the journal PLoS ONE.