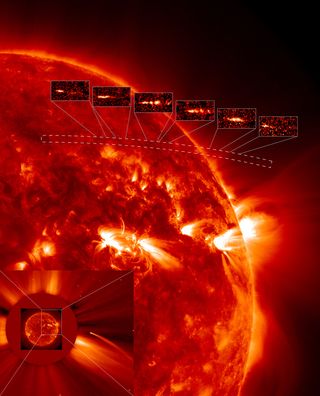 A powerful M2-class solar flare erupts from the sun on Jan. 19, 2012 in this imager from NASA's Solar Dynamics Observatory.
(Image: © NASA/SDO)

A powerful flare erupted from the sun Thursday (Jan. 19), unleashing a plasma wave that may supercharge the northern lights for skywatchers in high latitudes this weekend.

The solar flare occurred at about 11:30 am EST (1600 GMT) and touched off a massive solar explosion — known as a coronal mass ejection — aimed at Earth, space weather experts and officials said. The charged particles from the sun explosion should reach Earth by Saturday night (Jan. 21), and could amp up northern lights displays when they hit the upper atmosphere.

"Forecasters say strong geomagnetic storms are possible when the cloud arrives during the late hours of Jan. 21st. High-latitude (and possibly middle-latitude) sky watchers should be alert for auroras this weekend," the skywatching website Spaceweather.com announced in an alert.

According to the Space Weather Prediction Center maintained by NOAA, Thursday's solar flare erupted from an active sunspot group called Region 1401. Another solar hotspot, called Region 1402, is also fired off a flare, the center reported.

Auroras occur when charged particles from the sun interact with Earth's upper atmosphere, releasing visible light in the process. The particles are funneled toward Earth's polar regions by the planet's magnetic field, with the northern auroral displays known as the aurora borealis, or northern lights. The southern counterpart is called the aurora australis, or southern lights.

Thursday's solar flare rated as a powerful M2-class sun storm on the scale used by astronomers to measure flare strength. M-class storms are powerful, but mid-range, types of solar flares. They fall between the weaker C-class flares and the most powerful X-class solar storms, which can pose a threat to satellites and astronauts in orbit, cause widespread communications interference and damage infrastructure on Earth when aimed directly at the planet.

SDO mission scientists have said that sunspot group 1401 has been unleashing solar flares almost daily as the sun's rotation slowly turned the solar hotspot toward Earth in recent days. On Wednesday (Jan. 18), the region unleashed an M1.7-class solar flare, they said in a Twitter post.

The sun is currently in the middle of an active phase of its 11-year solar weather cycle. The current sun storm cycle, called Solar Cycle 24, is expected to peak in 2013, NASA scientists have said.

Editor's note: If you snap an amazing northern lights photo, or other skywatching image, and would like to share it for a possible story or gallery, please contact managing editor Tariq Malik at tmalik@space.com.

This article was provided by SPACE.com, a sister site to LiveScience. Follow SPACE.com for the latest in space science and exploration news on Twitter @Spacedotcom and on Facebook.