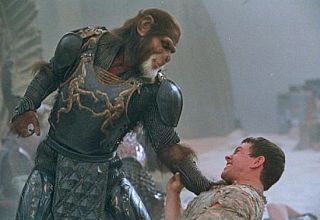 What if Neanderthals, who bit the dust just 28,000 years ago, had instead wised up and were now living next door? Or what if, during all these millennia that humans have been evolving, some unrelated creature had evolved cognitive and technological prowess in keeping with our own? Another scenario: what if humans had split into two separate species — the original gangsters, and a successful evolutionary offshoot?

These are all perfectly reasonable histories of the world that would have resulted in two advanced species of Earthlings living side-by-side today. They're just not the histories that happen to have happened.

But what if they had? Would we break bread with our brainy cohabitants or be locked in a constant battle for supremacy?

Oh, them – just ignore them

In this hypothetical world, there would be three possible relationships between humans and "others," said William Harcourt-Smith, a paleoanthropologist at the American Museum of Natural History. The most likely one is that competition for resources would cause us to fight, constantly.

"Given knowledge of how humans behave within their species — the endless intertribal conflicts and wars that have sadly gone on for many thousands of years — I think that whenever resources become an issue, or competing ideologies become an issue, you get conflict," Harcourt-Smith told Life's Little Mysteries, a sister site to LiveScience. If one of the species was slightly cleverer or stronger or developed better technology than the other, the former would eventually decimate the latter, reminiscent of Humans vs. Neanderthals.

Alternatively: If, after tens of thousands of years of clashes between Humans and Others, no one had come out on top, the two species might have gradually drifted toward equilibrium, either by populating geographically separate regions of the globe or by adapting to require different resources, Harcourt-Smith said. Others might have developed an appetite solely for fish, for instance, while Humans might have specialized in animal husbandry, and come to find fish disgusting.

In either of those cases — if we lived in different regions or utilized different resources — Humans and Others would have developed cultural systems in which we were taught to avoid one another. That's what other species do under the same circumstances. "As long as there isn't competition, species just ignore each other," he said. "Two monkeys living in the same tree, for example — if they're not going after the same resources, they don't interact." [Why Haven't All Primates Evolved into Humans?]

But what might our imaginary friends/enemies be like? Granted, they could look like anything — could have evolved from apes, elephants, dolphins or some other creatures — but Harcourt-Smith believes there are three traits the Others would definitely need in order to be technologically advanced.

"First, you need cognitive abilities that allow you to construct things, to conceive of abstract ideas or conceive of an object with many moving parts, each of which has a function. You must have forward planning and be able to think outside space and time in an abstract sense, in order to create that object," he said.

Second, they must have a way of manipulating objects, both with great strength and with great finesse. We manage this with our hands — amazing structures that can grip objects very powerfully but can also perform tasks that require great delicacy and dexterity, such as sewing with needle and thread. "Imagine that, in another creature, their feet develop these incredible abilities, or their tongues," he said.

Lastly, cultural transmission is essential. It's uncommonly rare to find a single human who knows how to build a computer from scratch, starting with mining the raw materials. Or, for that matter, someone who knows how to build an irrigation system, or a gun. Rather than reinventing the wheel over and over, humans pass down knowledge from one generation to the next. We also have job specialization within our societies to make them function more efficiently. For a nonhuman society to achieve similar technological progress, they too would need some sophisticated form of communication.

There's one more scenario that must be considered: Could another group of highly intelligent Earthlings someday arise?

According to Harcourt-Smith, in the long term (millions or billions of years out), all bets are off. "We don't know what the future holds — how other species of advanced mammals might evolve," he said. For that to happen, some cataclysmic event would have to cause the human population to plummet in order to clear the way for a competitor.

Alternatively, he said, a group of pioneering humans could venture into space and settle somewhere else. The new environment would cause them to undergo rapid evolution and then, some 100,000 years later, they would have become a distinct species that might still interact with the same old humans back on Earth.

"The other possibility is through our own making — genetic engineering and such. Putting human genes into animals and goodness knows what. But you never know. It's certainly possible."