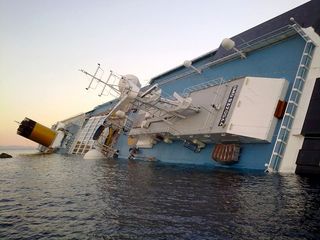 The hectic evacuation of the sinking cruise liner Costa Concordia has been compared with the likes of the disastrous Titanic disaster. In fact, Swiss survivors even told the newspaper La Tribune de Genève that Celine Dion's "My Heart Will Go On," the theme song to the 1997 film "Titanic," was playing in their dining room as the ship hit the rocks.

So how do the two shipwrecks match up? While the loss of life on the Titanic was much worse than on the Costa Concordia, even the Titanic's poorly planned evacuation may have been less chaotic than the one off the Tuscan coast. By the numbers, here's a side-by-side look at the two cruise ship disasters:

Bragging rights: The Titanic was the largest ship of her day. The Costa Concordia had the largest spa center ever built on a cruise ship.

Cause of wreck: The Titanic famously hit an iceberg on its starboard side in the middle of the North Atlantic, while the Costa Concordia struck a rock on its port side when the captain brought the ship in close to the Tuscan island of Giglio in the Mediterranean Sea.

Lifeboat capacity: The Titanic's lifeboats could have carried no more than 1,178 people. Nowadays, according to the International Maritime Organization, ships are required to have plenty of lifeboat space, with enough lifeboats hanging off the port side to accommodate half of the passengers, enough on the starboard side to accommodate the other half, and room for 25 percent more of the ship's passengers in inflatable rafts stored onboard. [Titanic Quiz: Fact or Fiction?]

"The Costa Concordia had sufficient lifeboat space, as far as we know, by the regulations she operates under," said Charles Weeks, an emeritus professor of marine transportation at the Maine Maritime Academy, and a member of the Titanic International Society. Unlike the Titanic, which lacked sufficient staff at lifeboat muster points, the Costa Concordia seemed to have crew supervision at the lifeboat stations, he said. The delay in lowering the lifeboats, which occurred about 45 minutes to an hour after the ship hit the rocks, may have been the captain's call, he said.

"There may have been a perfectly valid reason why he waited so long," Weeks told LiveScience. "You don't want to put lifeboats in the water while the ship is still making way. That can be very hazardous."

Time it took to sink: The Titanic went down over a period of two hours and 40 minutes. The Costa Concordia began listing about 20 minutes after it hit a rock near Giglio Island and was completely on its side within about three hours.

Depth of the wreck: The Titanic lay on the seafloor 12,460 feet (3,798 m) below the surface. The Costa Concordia essentially ran aground and is now half-submerged — the ship is unable to float in water less than 26 feet (8 m) deep.

Temperature of water: The passengers of the Titanic unlucky enough to end up in the water likely perished in a few short minutes, as the water temperature was just 28 degrees Fahrenheit (minus 2 degrees Celsius).

According to Accuweather, the air temperature when the Costa Concordia crashed was in the mid-to-low 40s Fahrenheit. The water temperature was in the mid- to upper-50s. In 50-degree water, hypothermia sets in quickly; boating guides put the time at about 60 minutes until exhaustion or unconsciousness, with death following within three hours.

Loss of life: Only 711 of the passengers aboard the Titanic were rescued, resulting in a death toll of 1,514, according to the British Wreck Commissioner's Inquiry. As of today (Jan. 18), an estimated 11 Costa Concordia passengers were confirmed dead, with 23 still missing.

Fate of the captain: Edward J. Smith, the captain of the Titanic, went down with his ship. His body was never found.

The Costa Concordia captain, Francesco Schettino, allegedly left the ship with passengers still onboard. He claims he tripped and fell into a lifeboat while coordinating the evacuation and could not get back on the ship. A transcript of a phone conversation between Schettino and a coast guard officer reveals the officer insisting Schettino return to the ship, and the captain refusing. Schettino is now under house arrest and is being investigated for manslaughter.

The standard of the captain being the last person to leave a crippled ship serves two purposes, Weeks said. First, it's the captain's job to take care of everyone else on the boat. Second, if a captain stays with a damaged ship, he can protect the ship owner's interests. If the captain is still on the boat, the owners can arrange a towing contract to get the vessel back to port, Weeks said. If the ship is abandoned, it must be salvaged, which can be a more complicated and costly process for the owners.

Hundreds of Titanic passengers never had a chance at survival, given the lack of lifeboat space available. Not only that, but a U.S. inquiry into the disaster found that the evacuation process was a mess: There was no system for loading the boats, and many of the boats went down partially filled (though there was space for 1,176 people on the boats, only about 700 made it onto one). Additionally, the loss of life would have been much worse had the weather have been rough, the panel found. With the lifeboats suspended 70 feet (21 m) above the ocean, rough waters would have made lowering them without smashing them against the ship impossible.

On the other hand, all reports indicate very little panic during the Titanic evacuation, at least not until the very end. This is likely because most passengers didn't realize the seriousness of the situation, Weeks said. There are reports of passengers refusing to get on the lifeboats, choosing instead to stay in the warmth and light of the doomed ship.

The same cannot be said of the Costa Concordia evacuation, which survivors describe as chaotic. "It was every man for himself," one survivor told French News outlet France 24. Crew members reportedly panicked and jumped aboard lifeboats before passengers.

The Costa Concordia listed to one side, in contrast with the Titanic, which tilted forward, her bow in the water. That may have made the Concordia sinking seem more dramatic than the sinking of the Titanic, at least from the perspective of those onboard.

"A ship that lists to one side is far more dramatic than a ship that trims down by the head," Weeks said.

The evacuation of the Costa Concordia was delayed, with passengers initially informed that the ship was having a minor electrical problem. There had been no evacuation drill onboard — it was scheduled for Saturday — so passengers were confused. Many of the crew did not speak Italian and could not communicate with their charges. Some cruise-goers reported being on lifeboats captained by waiters and other support staff.

Weeks said reports of the crew's behavior still needed confirmation, but said that such a situation is not without precedent. The cruise ship Oceanus, for example, sank off the South African Coast in 1991.

"The social director wound up overseeing the evacuation of the passengers," Weeks said. "The captain and certain members of the crew went off in the first lifeboat."