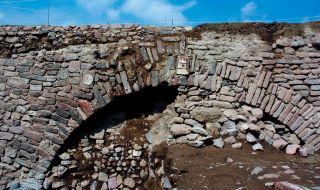 The east end of the tunnel, where the water exited, was decorated in petroglyphs and stucco reliefs.
(Image: © Edith Camacho INAH)

Archaeologists have uncovered a 17th-century tunnel filled with indigenous rock carvings in the city of Ecatepec in Mexico. The tunnel likely served as part of a floodgate for a dike — through which water entered on one side and exited on the other — that was created to control the constant flooding that ravaged the lands.

The carvings decorating the east end of the 27.6-foot-long (8.4 meters) tunnel include 11 pre-Hispanic images — or those that date back to the Native Americans that lived in the area before 1521 when it was conquered by the Spanish — in the form of etchings into the rock called "petroglyphs" and stucco reliefs. The reliefs were created by sculpting an image and then painting it with limestone, said Raúl García Chávez, coordinator of the salvage and enhancement project for the dike.

The carvings include a "chimalli" or war shield, a flint point and the head of a bird of prey, while the stucco reliefs resemble raindrops.

The raindrop symbols were found on the upper part of the keystone — the top stone that holds the arch together — also on the east end of the tunnel where the water exited; these symbols could represent a link with Tlaloc, the Aztec god of rain, Chávez told Live Science. The lower part of the keystone is engraved with an image of a temple. On the west side, where the water once entered the tunnel, the researchers found one more petroglyph which they are currently studying. They also found four iron nails and two 21-foot-long (6.5 m) wooden beams.

The dike, known today as the Albarradon de Ecatepec is 2.5 miles (4 kilometers) long. It was built in 1605 to control the water that entered the city of Texcoco from the nearby Xaltocan and Zumpango lakes, according to a statement from Mexico's National Institute of Anthropology and History (INAH).

Because Mexico City sits in a basin where water has no outlet, the city has dealt with periodic floods since ancient times. The dike stood strong for two decades, until the Great Flood of 1629 took hold of the city, which remained flooded for five years before waters receded. Colonials "canceled" the floodgate at the time by covering it up with millions of rocks and ash; they later ordered the building of two other floodgates, Chávez said.

Three thousand indigenous people are thought to have constructed this dike under the supervision of the Spanish friars Jeronimo de Aguilar and Juan de Torquemada, Chávez said. While the newfound carvings and stucco reliefs show influences from indigenous people, some of the construction techniques, such as the arches of the tunnel, more closely resemble European methods, according to the statement.

"It does not have pre-Hispanic methods, but rather semicircular arches and segments of andesite, lime and sand mortar, and a floor at the top, with stone master lines and ashlars" or finely worked stones, Chávez said in the statement, referring to the tunnel. "Everything is Roman and Spanish influence."

One hypothesis is that the glyphs and stuccoes on the tunnel came from people in the pre-Hispanic villages of Ecatepec and Chiconautla who worked with other indigenous people in the region to create the dike in eight months, he said.

INAH along with the Mexican government began salvaging and enhancing the dike in 2004. Part of the area has now been renovated and turned into a park that will open to the public in a couple of weeks, according to the statement. The original stuccos, petroglyphs, nails and wooden beams will be transferred to the Casa Morelos Community Center, and replicas will be installed in place of those artifacts.