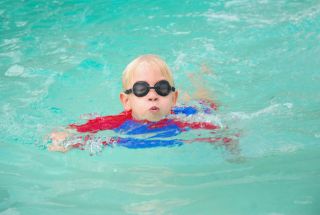 The rate of children hospitalized yearly due to drowning-related incidents has dropped by 50 percent since the early 1990s, a new report finds.

"The report shows that we're doing a good job," said lead author Stephen Bowman, an epidemiologist and professor at the Johns Hopkins Center for Injury Research and Policy.

"Trends are going in the right direction, but there's still about 1,000 deaths from drowning in children per year," Bowman said. "And that's too many."

This is the first study to look at trends in hospitalizations for drowning incidents in children.

The study is published today (Jan. 16) in the journal Pediatrics.

Drowning highest among infants and toddlers

Every day in the U.S, about ten people die from accidental drowning. Of these, two are children 14 years old or younger, according to the Centers for Disease Control and Prevention.

Drowning is the second leading cause of accidental death in children ages 1 to 19 in the U.S.

Among children, infants and toddlers are the highest risk group. In 2007, almost 30 percent of children who died from accidental injury died from drowning.

Near drownings can cause brain damage, which can lead to long-term health complications such as memory problems, learning disabilities and permanent loss of basic functioning.

"Drowning is such a terrible, nasty injury because you're not getting enough oxygen," said Dr. Linda Quan, a pediatric emergency room physician at Seattle Children's Hospital.

"You can have a cardiac arrest, and with medical assistance, your heart might be able pump again," said Quan who was not involved with the work.

"But other organs including the brain may not be able to sustain such an injury," she said.

Which may explain how even after resuscitation, a person can still die after being hospitalized.

Researchers looked at hospital data over a 16-year period and found the rates of hospitalization from drowning-related incidents declined in children younger than 19 years old.

From 1993 to 2008, researchers found, the number of hospitalizations associated with drowning decreased from about five cases per 100,000 children, to two cases.

The reason for the overall decline may be due to "educational campaigns that have been put into place to reduce drowning," Bowman said.

"Efforts such as putting fences around pools and encouraging parents to have kids in a supervised setting, are some of the things we'd like to believe are yielding positive results in reducing drowning," he said.

But Quan said she isn't entirely sure such efforts are the only reason for the decline.

"It could mean that kids aren't going to the beach as often," she said. "Or maybe they're just sitting at home playing computer games. We don't really know for sure why there's a decline." She said there hasn't been enough attention given to water safety.

What is most important is that parents follow all the necessary steps to ensure their child is safe, she said.

"Every family needs to think about how to prepare and respond to any water related activity," Quan said.

Some of her suggestions included:

Pass it on: Fewer kids require hospitalization from drowning.