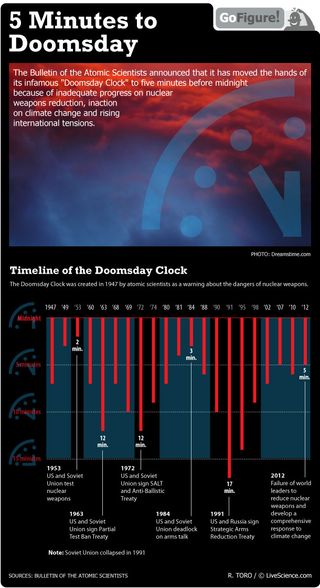 The Doomsday Clock kept by the editors of the Bulletin of the Atomic Scientists has warned against the danger of nuclear war since 1947.
(Image: © Ross Toro, LiveScience Contributor)

This week, scientists set the hands of the infamous "Doomsday Clock" forward one minute from two years ago.

"It is now five minutes to midnight," Bulletin of the Atomic Scientists (BAS) director Kennette Benedict announced Jan. 10 at a press conference in Washington, D.C.

The Doomsday Clock came into being in 1947 as a way for atomic scientists to warn the world of the dangers of nuclear weapons. That year, the Bulletin set the time at seven minutes to midnight, with midnight symbolizing humanity's destruction. By 1949, it was at three minutes to midnight as the relationship between the United States and the Soviet Union deteriorated. In 1953, after the first test of the hydrogen bomb, the doomsday clock ticked to two minutes until midnight.

Today the clock is a symbol of the threat of humanity's imminent destruction from nuclear or biological weapons, climate change and other human-caused disasters. In making their deliberations about how to update the clock's time this year, the Bulletin of the Atomic Scientists focused on the current state of nuclear arsenals around the globe, disastrous events such as the Fukushima nuclear meltdown, and biosecurity issues such as the creation of an airborne H5N1 flu strain.