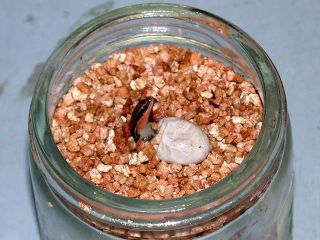 A skink hatchling in the lab. Each egg was placed in a jar and incubated in either warm or cool conditions.
(Image: © Melanie Elphick)

When the heat is on, some species of lizards get smarter, new research shows. These lizards are better at learning where to find the best hiding spots, a trait that could help them survive when hunted by predators.

This ability could also be helpful as the Earth warms. Perhaps this increased intelligence will give the lizards a leg up on adapting to climate change, the researchers said.

"Climate change causes our environment to change rapidly. If the hotter temperatures are making them better able to perform certain novel tasks, they would be better able to survive during those changing conditions," study researcher Joshua Amiel of the University of Sydney told LiveScience. "It might make them able to more quickly adapt to their environment as it's changing."

The researchers collected wild, pregnant three-lined skinks, which live in forests in Australia. The lizards' eggs were collected and placed in jars in either a "hot" or a "cold" condition. In each condition, the temperature fluctuated 27 degrees Fahrenheit (15 degrees Celsius) in a 24-hour period, to simulate night and day. In the warm condition the average temperature was 71.6 F (22 C) and in the cold it was 60.9 F (16 C).

Once the eggs hatched, the researchers tested the tots' smarts by placing them in a cage with two places to hide. The catch: One of these hidey-holes was covered in Plexiglas. The researchers spooked the lizards using a paintbrush and then counted how many times each lizard tried to enter the wrong hole. This was repeated four times a day for four days. If the lizard made fewer errors in the second half of trials they had "learned." [The 5 Smartest Animals]

Comparing the initial tests with the last one (test number 16), the researchers found the lizards that grew in warm nests were quicker learners than those that grew in cold nests. In test 16, only one out of 12 warm-nest lizards made a mistake, while five of nine in the cold group made the wrong choice at least once in that test.

Not much is known about lizard smarts, but a study in July on learning in anoles indicate they may be smarter than we give them credit for. The lizards were able to find hidden food and remember its location from day to day.

"Lizards are not as simplistic as we think they are. We are actually running lizards through intelligence tests for mammals and birds," Amiel said. "They might not be as smart and adaptable as birds, but there is definitely a variation in learning ability there that is worth having a look at."

While the researchers haven't tested the implications of this learning on lizard survival yet, they are confident that a better memory would improve the animals' survival. They are currently studying just how this increase in heat helps the lizard's brain development.

Climate change probably won't make for a super-brainy lizard, though. They do have an upper limit, beyond which the heat stunts their physical development and causes die-off, probably around 104 F (40 C), the researchers say.

The study will be published in tomorrow's (Jan. 11) issue of the journal Biology Letters.