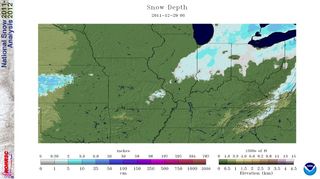 The holiday season continues to be a no-show for snow in the eastern half of the country.

Just 7 percent of the Midwest is snow-covered today, compared with 57 percent on Dec. 29, 2010. Last year at this time, the Deep South was still a-buzz after an unusually big snowfall, and the Northeast was still digging out from the big post-Christmas blizzard. But December has largely been a bust for snow this year; only parts of the West have seen any snow.

Last year, the lake-effect snow machine was running full blast in the Northeast and Midwest. The snow was so bad in Buffalo, N.Y., even the snowplows got stuck. Several feet of snow fell in western New York and in cities around the Great Lakes. That hasn't happened yet this year, despite the snow season starting with a bang. [Images: Snow from Space]

A surprisingly early snowstorm smacked the East Coast on Halloween, knocking out power to thousands in Connecticut. New York's Central Park recorded 2.9 inches of snow (7.6 centimeters), the first time since record-keeping began in 1869 that an inch or more of snow has been recorded there during the month of October, according to the National Weather Service. Another surprise came Nov. 28 when Alabama saw a November snowfall for the first time in 35 years. But not much substantial snow has fallen in the eastern half of the country since, and the lack of snow is concerning to some.

At Sugarloaf Mountain in Maine, the largest ski resort east of the Rockies, only 25-to-30 inches (about 64-to-76 cm) of snow fell in December. The resort has relied on artificial snow to stay open.

"Like [for] everybody in the country it's been a slow start to the season," said Ethan Austin, a spokesperson at Sugarloaf Mountain.

Luckily for the snow bunnies, the temperature dropped to 0 degrees Fahrenheit (minus-18 degrees Celsius) today, which is cold enough to crank up the snow machines and open more than 30 trails, Austin said.

The eastern United States has seen storms this winter, but the warmer-than-average temperatures have caused mostly rain, and not snow, to fall across the region.

Temperatures this time of year in the East Coast are partially driven by a climate pattern of opposing atmospheric pressures in the northern middle and high latitudes, called the Arctic Oscillation, said Jake Crouch, a climatologist at the National Climatic Data Center in Asheville, N.C. The past two winters, the Arctic Oscillation, or AO, was mostly in a record-strength negative phase. This year, the AO has been in a positive phase.

"When the AO is positive the Eastern Seaboard, Midwest, and Southeast tend to have warmer-than-average temperatures," Crouch told OurAmazingPlanet.

In the Great Lakes so far this year, not much cold air has been blowing over the big bodies of water, so the region has seen little of its infamous lake-effect snow.

Lake-effect snow is created when bitter Arctic air spills south over the warmer Great Lakes. The cold air warms, moistens and forms into snow clouds, which drop the white stuff in whichever direction the strongest wind is blowing. Lake-effect snow is heaviest downwind, or leeward, of a water body.

Where the snow is

In early December, a light snow fell on north Texas, with heavier snow blanketing much of New Mexico. Interstate 25 was snow-packed in New Mexico, and severe wind created blizzard and whiteout conditions. On Dec. 14, more than a foot of snow fell in Flagstaff, Ariz., according to the NWS.

As these western storms have moved east, they haven't brought any snow. Just to the east of the western trough, a strong ridge — a long region of high atmospheric pressure — has stayed stretched out into the Northern Plains. This has allowed much-warmer-than-average temperatures to stretch all the way to the U.S.-Canadian border.

"As the western storms have moved from the west to east, they have moved into warmer-than-average air temperatures, and precipitation has been falling as rain and not snow," Crouch said.